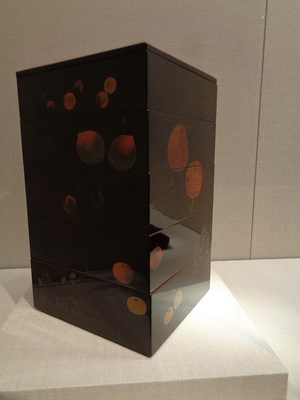 A tiered food box (jûbako) by Zeshin, in the collection of the Metropolitan Museum of Art

Shibata Zeshin was an innovative painter and lacquerware artist of the late Edo period and Meiji period. He painted in lacquer, rather than ink or mineral colors, on paper and silk, and invented a wide variety of techniques and effects for lacquerware, using metals and other materials.

Zeshin was born in Tachibana-machi 2-chôme (east of Nihonbashi), and began practicing lacquerware techniques under Koma Kansai from age 11. In 1822, he then began studying Maruyama-Shijô style painting under Suzuki Nanrei. He moved to Kyoto in 1830, and studied for a time under Okamoto Toyohiko before returning to Tokyo. He made a home at Asakusa 1-chôme, calling his home Tairyûkyo (対柳居).

His works include lacquer paintings known as urushi-e, as well as lacquerware boxes and the like. In both, he made extensive use of metals - including not just gold and silver, but also copper, bronze, and iron - as well as other materials to create novel effects. In a number of his works, he experimented with materials in attempts to emulate or reproduce the appearance and/or texture of Western oil painting.

Zeshin played a role in the founding of the Japan Lacquerware Artists Society (Nihon shikkô kai), the Ryûchikai (Dragon Pond Society), and the Oriental Art Society (Tôyô Kaigakai). In 1890, the year before his death, Zeshin was one of a number of artists to become the first to be named Imperial Household Artists (Teishitsu gigeiin).

He died on July 13, 1891, and is buried at Shôfuku-ji in the Asakusa neighborhood of Tokyo. He was so well-known in the Western world that the Times of London devoted a full page to his obituary.[1]