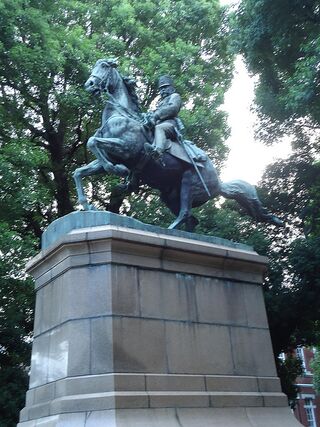 Bronze statue of Prince Kitashirakawa, erected 1903/1/26 in the Kitanomaru (North Bailey) of the Tokyo Imperial Palace, outside the Headquarters of the Imperial Guard, later repaired and moved slightly.

Yoshihisa was born the ninth son of Prince Fushimi-no-miya Kuniie in 1847. At the age of one, he was named abbot (monzeki) of Shôren-in, and then at 11, in 1858, abbot of Rinnô-ji & Kan'ei-ji (in the Ueno neighborhood of Edo), with the title of Rinnôji-no-miya. He would be the last member of the imperial family to hold that position.[1] Yoshihisa was also given the Buddhist name Kôgen around that time.

During the Boshin War of 1868, he met with Imperial Prince Arisugawa Taruhito and requested that Shogun Tokugawa Yoshinobu issue orders calling for Edo to not be attacked.[2]

In 1870, Yoshihisa returned to secular life, and regained the title of Fushimi-no-miya (Prince Fushimi). He joined the military, and was ordered by Imperial edict to travel to Prussia to study military studies. While there, in 1872, he succeeded to the title Kitashirakawa-no-miya. After returning to Japan, he joined the Imperial Guard in 1877, and was named a Major General in the Imperial Japanese Army in 1884. He served the head of the First Infantry Brigade, and the staff officer headquarters. In 1892, the prince was then promoted to Lieutenant-General. He then passed through being head of the 4th and 6th Divisions, before being named head of the Imperial Guard in January 1895. The Prince traveled to Taiwan in that capacity, but fell ill from tropical disease, and died on 28 October 1895.

He was posthumously promoted to Army General and granted the Collar of the Supreme Order of the Chrysanthemum and the Order of the Golden Kite, Third Class. He is buried in the Imperial cemetery at Toshima-ga-oka Cemetery in Tokyo.