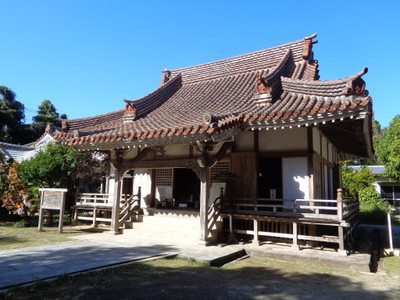 Kin Kannon-ji is a Buddhist temple in Kin Town on Okinawa Island. Though the main hall, containing a sacred image of the bodhisattva Kannon, only dates back to 1942, it was re-built at that time using the style and methods of early modern Ryukyuan temple architecture, and is today the oldest and best surviving example on the island of that traditional architectural style.

The temple and the associated Kin Shrine (a Kumano Gongen shrine based in the caves beneath the temple, considered one of the Ryukyu Eight Shrines) are said to have been founded by Nisshû Shônin, who set sail from somewhere near Kôya-san (modern-day Wakayama prefecture) in search of the Pure Land and was castaway on Okinawa. Arriving at Tomikura (today, Fukuhana), near Kin Town, he established a temple, and carved images of Kannon, Amida, and Yakushi to install within it. Around the same time, Nisshû is said to have prayed for Kumano Gongen to come and manifest itself in the caves beneath the temple, where he then established Kin Gongen Shrine. Despite the shinbutsu bunri (dividing Shinto from Buddhism) policies of the Meiji government, at Kin the two still remain linked today.

The temple was declared a Tangible Cultural Property in 1984 by the Japanese national government.