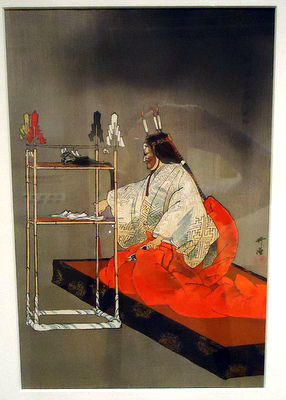 Kanawa is a Noh play of the third category (Women Plays). Based on an episode from the Tale of the Heike, the play centers on a woman whose husband has left her for another woman; she consults an oracle in her anger, and the oracle tells her she must dress in red, paint her face red, and wear a metal crown (kanawa) with candles on it, allowing herself to be consumed by her anger. The play then shows her shifting emotions, as she calmly and resolutely prepares herself, before becoming consumed by her anger.