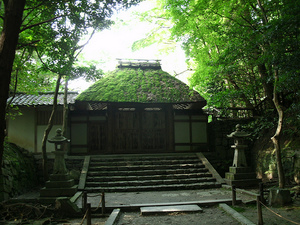 The temple is said to have gotten its start when the Buddhist monk Hônen, along with his disciples Anraku and Jûren, meditated and performed nenbutsu in a thatched-roof hut in the Shishigatani area of Kyoto.

In 1206, while Emperor Go-Toba was in Kumano, two court ladies by the names of Matsumushi and Suzumushi took the tonsure in order to join Anraku and Jûren, angering the emperor in the process. Hônen was exiled to Sanuki province, and Anraku and Jûren were executed. The thatched-roof hut was destroyed.

In 1680, the 38th abbot of Chion-in, Banbu prayed for the construction of a nenbutsu dôjô on the Hônen-associated site. His disciple Ninchô laid the foundations for the current temple complex.

Hônen-in was an independent temple within the Pure Land sect, but in 1953, it became independent from the sect, becoming its own independent institution. The complex is normally closed to the public, but it opens to the public from April 1-7 and November 1-7 each year.