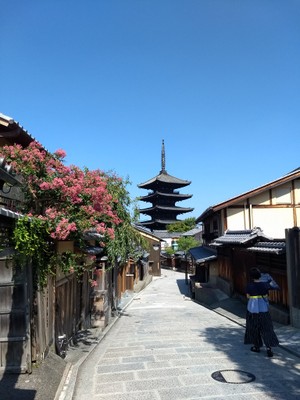 Hôkan-ji, also known as Reiô-zan, is a Rinzai Zen temple in the Yasaka area of eastern Kyoto, known for its prominent pagoda, the Yasaka-no-tô (Yasaka Tower). It is today affiliated with the Kennin-ji branch of the Rinzai school.

The temple is traditionally said to have been founded by Shôtoku Taishi after being instructed by the bodhisattva Kannon to do so, in a dream. Though the temple is believed to have been far larger and more prominent in ancient times, today only the pagoda, Taishi Hall, and Yakushi Hall survive.

The 46-meter-tall pagoda is considered a remarkable example of Hakuhô period architecture; its square form is six meters wide on each side. Lost to fire and reconstructed a number of times over its history, the current pagoda dates to a reconstruction commissioned by Ashikaga Yoshinori in 1440. The pagoda contains images of five Buddhas, and is said to also contain a relic of pieces of the bones of the historical Buddha.

The temple's collections include notable historical paintings of the pagoda and of Ashikaga Yoshinori, as well as various written records of the temple's history.