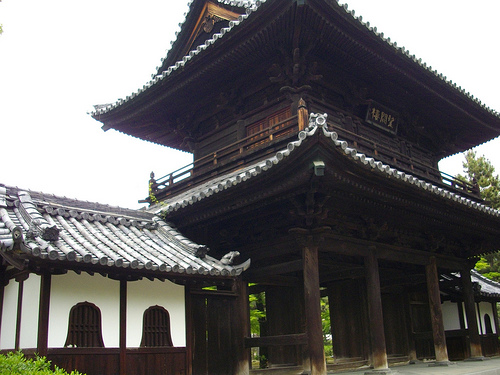 The main gate at Kennin-ji.

Kennin-ji, a Buddhist temple in Kyoto, is the oldest extant Zen temple still operating in Japan. It is the head of the Kennin-ji school of Rinzai Zen.

The temple was founded by Myôan Eisai following his return from Song Dynasty China. After founding Zen temples Shôfuku-ji in Hakata and Jufuku-ji in Kamakura, he was granted land by Zen convert Shogun Minamoto no Yoriie, in Kyoto, between Shijô and Gojô Avenues, to the east of the Kamogawa. In 1202 (the second year of the Kennin era), he founded on that site a combination Zen/Tendai/Shingon Buddhist temple, calling it Kennin-ji.

The temple owns numerous treasures, chief among them a pair of byôbu (folding screens) paintings by Tawaraya Sôtatsu depicting Fûjin and Raijin (gods of wind and thunder) which has been designated a National Treasure.