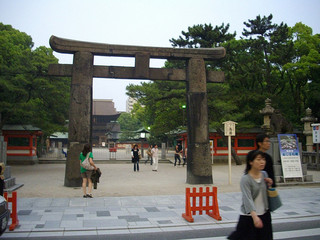 The ichi-no-torii, an Important Cultural Property

Hakozaki Shrine is a major shrine in the city of Fukuoka. It is one of four major shrines in the country dedicated to Hachiman, along with ones in Kamakura, Yawata (Kyoto), and Usa (Ôita).

It is unclear when the shrine was established, but it appears in records as early as 921. In addition to Hachiman, the shrine is dedicated to Empress Jingû, Emperor Ôjin, and Tamayori-hime.

The shrine is approached via a long pathway, with two large stone torii at either end. One, the ichi-no-torii, is considered an Important Cultural Property, and is said to have been erected by Kuroda Nagamasa, lord of Fukuoka han, in 1609.

The shrine compound formerly included a Buddhist temple hall called the Tôrôdô, in front of which Sen no Rikyû and Toyotomi Hideyoshi are said to have often held tea ceremonies during Hideyoshi's 1587 Kyushu Campaign. This hall was later moved to the nearby temple of Ekô-in.

Hakozaki is famous today for the yatai (food stalls) frequently set up just outside of the shrine.