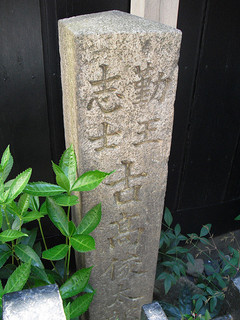 Stele marking the former site of Furutaka's residence in Kyoto, and identifying him as kin'ô (royal loyalist) and shishi (man of spirit).

Furutaka Shuntarô was an Imperial loyalist / anti-shogunate rebel (shishi) active in Kyoto during the Bakumatsu period.

He was born in Ôtsu in 1829, in what was then Ômi Province. His father left his village and served under the Ôtsu magistrate (daikan) Ishihara Kiyoemon, later becoming a retainer to a Bishamonten temple in Yamashina, in Yamashiro province. Shuntarô was raised near that temple, and studied waka under the nobleman Karasumaru Mitsutoku, developing thereby a close relationship with the kuge.

He later learned Loyalist ideology from Umeda Unpin, and interacted and mingled with other Loyalists.

At the request of his fellow Loyalist Yuasa Gorôbei, he was adopted by Yuasa Kiemon. He changed his name to Masuya Yuasa Kiemon, established a shop called the Masuya, and started secretly amassing weapons. Shuntarô passed on communications between Loyalists, and aided them in other ways, his shop becoming a major focal point for meetings for plotting against the shogunate.

However, early in the morning of 1864/6/5, he was apprehended by the Shinsengumi and subjected to harsh interrogation at the Mibu barracks. Under duress, he revealed that rebels were meeting at the Ikedaya that night. The famous Ikedaya Affair took place not long afterwards, when Shinsengumi soldiers raided the inn.

After his involvement in the Kinmon Rebellion, in which a great fire was set in Kyoto, Furutaka was executed on 1864/7/20, at the Rokkaku Prison. In 1891, he was posthumously awarded the Fifth Rank.