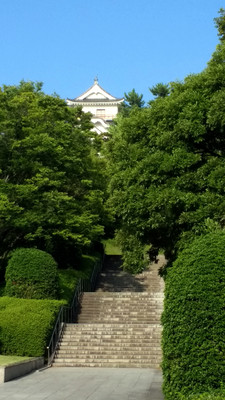 The main keep of Fukuyama castle

Fukuyama castle was the seat of the lord of Fukuyama han, in what is today Fukuyama City, Hiroshima prefecture. It was built by Mizuno Katsunari in the 1620s-1630s.

The castle was protected on the east, west, and south by two layers of moats, and on the north by rivers and mountains. Today, the moats have been filled in, and along with the san-no-maru (third bailey), these have been given over to urban development. The ni-no-maru and honmaru (second and main baileys) have been reconstructed and maintained as a historical castle site, however, with the tenshu (main keep) and certain other buildings being reconstructed in the 1960s-70s.[1]

One of the castle's towers, known as the Fushimi yagura, and one of its gates, the Sujigane-gomon, have been designated Important Cultural Properties. Both were originally constructed for Fushimi castle, and were relocated to Fukuyama in the 1620s-1630s. The Fushimi yagura is a three-story tile-roofed tower in irimoya style, eight ken by three ken in size. The Sujigane Gate is ten ken by three ken in size, also in irimoya style and with a tile roof.[1]

This article is a placeholder or stub. You can help SamuraiWiki by expanding it.
Retrieved from "http://samurai-archives.com/w/index.php?title=Fukuyama_castle&oldid=38009"
Categories: