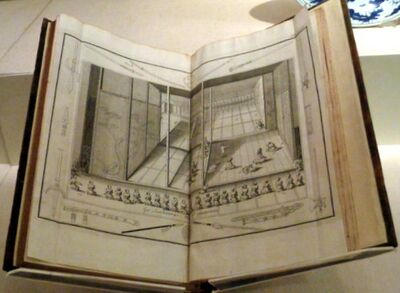 The Dutch audience with the shogun, as depicted in Kaempfer's History of Japan

Engelbert Kaempfer, a native of Germany, served as the chief medical officer for the Dutch East India Company on Dejima from 1690-1692. He accompanied the head of the Dutch factory on a mission to Edo for the first time in 1691.[1]

He traveled to Japan originally as physician attached to the Swedish embassy, but soon joined the Dutch East India Company. He had a talent for languages, and learned Japanese rather quickly. During his brief time in Japan, he interacted with many Japanese scholars and students, engaging in much cultural and informational exchange. Kaempfer also published a number of materials on his experiences in Japan, introducing various elements of Japanese knowledge to the West. Among these was Amoenitatum Exoticarum, published in Germany in 1712, which contained the first description in a European publication of Japanese soybeans, and the most detailed description yet of the processes of producing miso and soy sauce.

One such volume, originally published in Dutch and first published in English in 1727 as The History of Japan, and in French in 1732 under the title Histoire naturelle civile et ecclesiasique de l'Empire du Japon, attempted to provide an overview of Japanese history, art, culture, language, religion and geography, and included among many other topics a now oft-cited account of the journey to Edo of Dutch East India Company representatives, which he had accompanied twice. This volume became one of the chief sources of European knowledge about Japan at its time. The English version of the book was published by Sir Hans Sloane, the founder of the British Museum, and the Museum later acquired Kaempfer's personal collection of Japanese and Chinese prints in 1753.