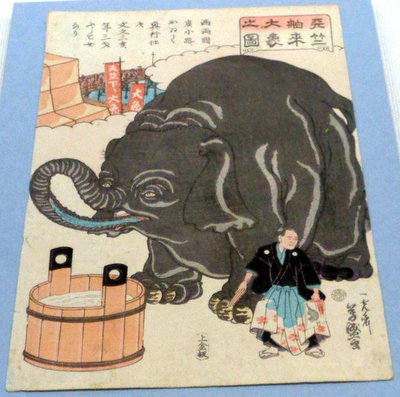 Elephants were known in Japan from an early period through Buddhist literature and iconography. In particular, the bodhisattva Fugen was often shown riding an elephant.

However, a number of live elephants also arrived in Japan before the Meiji period. One came in 1408, and another in 1602.[1] An elephant was also sent from the King of Cambodia to Ôtomo Sôrin in the 16th century, but it died soon after its arrival.[2]

In 1597, Luis de Navarrete Fajardo, a Spanish envoy from the Philippines, took an elephant named "Don Pedro" with him when he went to Osaka for an audience with Toyotomi Hideyoshi. A "Nanban" screen by Kanô Naizen depicting foreigners in a Japanese port city[3] shows an elephant carrying a man in a litter on its back accompanied by two keepers. Compared with elephants in other Japanese pictures, it is of firm shape and its skin is fairly smooth: it was probably based on a live animal, perhaps Don Pedro. On the other hand, the wobbly creature in a later Nanban screen [4] was probably based on traditional iconography.

The elephants about which the most is known were a pair that arrived in Japan in the 6th month of 1728. They were brought from Quang Nam by the Chinese merchant Zhèng Dàchéng (鄭大成) or Zhèng Dàwēi (大威), apparently at the request of Shogun Tokugawa Yoshimune. The female died in Nagasaki about 3 months later, but the male was sent to Edo. He was then about 6 years old. According to instructions issued for his journey along the Sanyôdô and the Tôkaidô, he was about 7 shaku high, 11 shaku long, and 4 shaku wide (2.1m x 3.3m x 1.2m). He ate bamboo leaves, green grass (180 kg or 400 lb per day), and hay. People were allowed to gather to look at him, but only at intersections, and not along the streets; they could follow the procession, but not get in front of it, and they could not look down upon the procession from second story windows. Some of these were the same prescriptions issued during any official procession; most of all, the concern was to not frighten or panic the animal.[5]

This elephant left Nagasaki for Edo in 1729/2,[6] and was granted an imperial audience with Emperor Nakamikado and Retired Emperor Reigen in Kyoto, being bestowed the Fourth Court Rank in order to do so. A diary by Watanabe Zen'emon entitled Zô kiyô (roughly, "Elephant Bulletin") records what Watanabe saw of, and heard about, the elephant's passage through the city.[7]

The entourage then went through the Hakone check-point, and after a journey of about 3 1/2 months reached Edo and was viewed by the shogun on 5/27. After that he was housed in the shogunal property at Shiba no Hama. However, he cost 200 ryô per year to feed, and less than a year later, the bakufu tried to turn him over to the private sector, but there were no suitable takers. The elephant then came to be used as a source of medicine. There were several epidemics of measles and smallpox in that period, and the shogunate was actively promoting the manufacture of a medicine made from cattle dung. Apparently it was decided that elephant dung would also work. The medicine made from the dung was called zô-hora 象洞 (lit. "elephant cavity"). A group headed by a man named Gensuke 源助 asked for permission to sell it as a commercial product. They hoped to distribute it so "everyone throughout the land, even those of lowest degree," could enjoy its benefits; the price per package was 10 mon. So, the elephant lived a quiet life as a medicine maker, occasionally being put on display.

Some accounts indicate that the elephant died only a few months later, in 1730,[8] but according to others, he lived on into the 1740s. According to that narrative, by 1741 he was getting aggressive and large (14 ft. tall, from shoulders down 9 feet, with a trunk of 7 feet), and there was concern about fire, so he was moved to Nakano village, where Gensuke lived. A very sturdy stable with a dry moat was built for him. But the shogunate was still interested in his welfare. Two months after he moved, a dôshin was sent unannounced to check up on him. A report was made to Yoshimune's close confidant Kanô Hisamichi that the elephant was doing well.

However, towards the end of the next year the elephant become ill. A nearby horse doctor had him warmed and gave him medicine, and another one used acupuncture and hot irons on his nails, but he died a few days later. The shogunate took his hide, but Gensuke took his bones. He and those after him tried to make money by displaying them, but it did not work too well. In 1779 the bones were sold to a temple, but they were lost in a fire during the Boshin War.