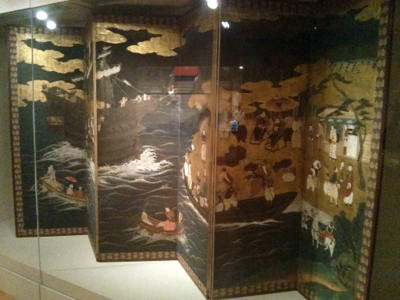 An early 17th century Nanban screen in the collection of the Peabody Essex Museum in Salem, Massachusetts

Nanban screens were a genre of folding screen (byôbu) paintings popular in the late 16th and early 17th centuries, depicting Europeans (Nanbanjin, lit. "southern barbarians"), as well as their fashions, sailing ships, and other associated motifs.

Nanban Screens typically take one of three forms: some focus on the foreign sailing ship in harbor; others on foreigners amidst a town scene, having made their way ashore and into town; many, meanwhile, divide these two scenes between the left and right-hand screens of the set, respectively.

Kanô Naizen is perhaps the most well-known of the Nanban screen painters. One of the most famous of Naizen's screens depicts Europeans (or, perhaps, Japanese in Nanban fashion) at the Toyokuni Shrine Festival (Hôkoku jinja matsuri). Another of Naizen's screens, depicting foreigners walking the streets of a Japanese port city (presumably Nagasaki), includes a depiction of an elephant carrying a man in a litter on the elephant's back.[1]

Nanban paintings declined in popularity quickly after the 1590s, disappearing entirely by the 1650s. This was in part due to Toyotomi Hideyoshi's persecution of Christians beginning in 1587, and also due to the expulsion of the Portuguese in the 1630s.