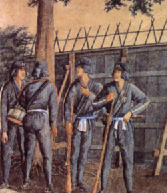 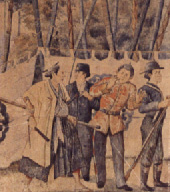 A military unit trained by the French instructors during the Bakumatsu. 1867/1/30, 15 French military instructors arrived in Japan. Bakufu released a notification to Hatamoto to attend the training. The French instructor Channoine immidiately found that the Hatamoto were not suitable for being soldiers. They were weakened during the peaceful Tokugawa period. He also pointed out that more than 40000 guns that Bakufu owned were rusted and not practical for use. According to Ôtori Keisuke's memoir, the leaders of each small unit were Hatamoto's sons but the general soldiers were farmers or merchants sons and there were plenty of gang men in the Denshutai.

The Denshutai participated in the Battle of Toba-Fushimi. When Edo castle surrendered, many of them deserted and gathered at Kônodai in Shimosa province. They formed new units under Ôtori Keisuke and Hijikata Toshizô.