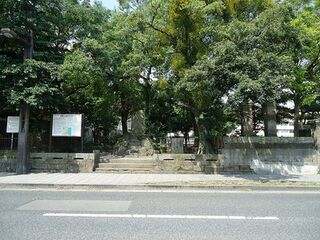 Plaques and stelae at the former site of Dairyû-ji

It was founded on the former site of a castle built by Shimazu Takahisa following his victory over Shimazu Sanehisa for dominance of the Shimazu clan. A lively center of political and cultural activity for around fifty years, the castle fell into disuse after Shimazu Iehisa built Tsurumaru castle. The site was then converted to a temple, which was named Zuiunzan Dairyû-ji, using the characters dai and ryû from the art-names of Takahisa and his son Shimazu Yoshihisa. Nanpo Bunshi was invited to be the first abbot of the temple.

The temple was abolished sometime in the mid-17th century, but was re-established in 1679. It held the memorial plaques (ihai) of a number of Ryukyuan envoys to Edo, including those of Chatan Chôshû and Nago Chôgen, who died in Kagoshima during their missions.[2]

Following the destruction of the temple, the site is today Dairyû Elementary School.