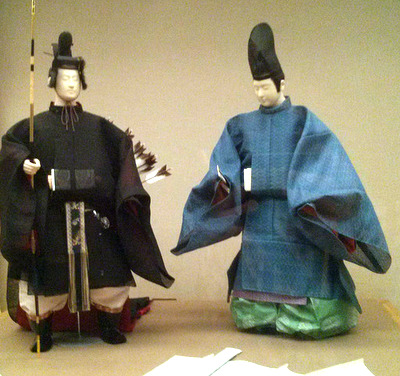 Court costume in the Imperial court followed Heian period precedents and styles throughout later periods, and costume of those styles continues to be employed for certain ceremonial purposes today. Court costume of the Heian and later periods was also adopted by warrior households, and then adapted or developed into the forms of formal or ceremonial dress now associated with the samurai class.

Sokutai (束帯) was the most standard form of formal ceremonial dress for male members of the court. Somewhat different in style for civil and military officials, the latter wore swords at their waist and carried bows as part of their formal costume.

During the Tokugawa period, daimyô wore sokutai for certain high-level ceremonies, including for the accession of a new shogun.[1]

Though used continuously within the court since the Heian period, sokutai and other forms of court dress enjoyed a certain revival in the Meiji period, as efforts were made to "revive" (often actually newly inventing) supposedly "ancient" court practices. One of the first official portrait photographs of the Meiji Emperor, taken in 1872, shows him in sokutai dress.[2]

Nôshi 直衣 was the chief style of everyday wear for male courtiers, outside of more formal or ceremonial occasions. Individuals wore different colors and designs as they aged.

Nôshi was adopted by the Tokugawa shogunate in the 1710s, as Confucian advisor Arai Hakuseki recognized that it had been an elite style of costume since long before the hitatare was adopted by the court; and thus, that nôshi was an even more elite style than the hitatare long worn by the samurai. Hakuseki thus implemented the use of nôshi for certain ceremonial occasions as part of a wider effort to elevate the refinement of the shogunal court.[3]

The hitatare 直垂 consisted of a long-sleeved jacket and trouser-skirt, originating as commoner dress in the early Heian period, before being adopted by many courtiers, who initially wore it over other clothing, for warmth. Hitatare became a standard element of court costume by the mid- or late Heian period, but was never considered as formal as nôshi or sokutai. It was then adopted into the standard costume of the warrior households by the Taira clan and others by the end of the Heian period.[4]