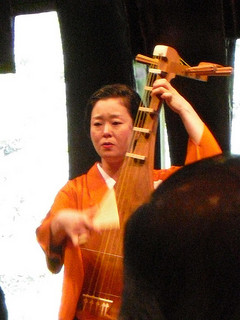 A member of the contemporary fusion music group AURA-J performing a portion of the Tale of the Heike on biwa.

Biwa hôshi were blind itinerant storytellers, prominent in the mid-Heian period through the Muromachi period. Performers of epic tales, accompanying themselves on the biwa (a stringed, lute-like instrument related to the Chinese pipa), they are particularly associated with the Tale of the Heike.

The biwa hôshi tradition began in mid-Heian period, with blind men seeking refuge at Buddhist temples, where they learned to play the biwa, and to entertain with stories, and may have adopted the custom of wearing monastic robes. The biwa was associated with an ability to contact unseen or supernatural forces; because of this, combined with the monastic robes worn by these lay performers, many began to regard the biwa hôshi as, perhaps, wielding some special abilities to ward off disease, pacify angry spirits, or the like. Blind biwa-playing storytellers thus came to travel the country, providing entertainment, supernatural services, and moralizing tales, for a living.

By the 1200s, Kyoto was home to a great many biwa hôshi, as was the area in and around Enryaku-ji on Mt. Hiei. The Genpei War ended in 1185, and the political after-effects were still being felt, and so, it has been suggested, there were many stories about the conflict circulating, as well as much demand for such stories. And so, the earliest versions of the tradition of reciting The Tale of the Heike were born. There is most likely no singular original version, but in the 1330s, Yoshida Kenkô related in his Tsurezuregusa that a former Shinano province official by the name of Yukinaga composed the Tale and taught it to a blind man named Shôbutsu to tell; further, he suggested that the performance tradition of the Tale incorporated an emulation of Shôbutsu's own vocal characteristics.

The Tale of the Heike became so prominent in the biwa hôshi repertoire that by the early 14th century, their entire performance tradition came to be known as heikyoku, or "Hei[ke] songs." Those storytellers based in Kyoto also formed a guild around this time, called the Tôdôza, and patronized by an aristocratic family. The Tôdôza later split in two, between the Yasaka-ryû, who refused to incorporate the unique style of a biwa hôshi named Kakuichi, and the Ichikata-ryû, who embraced Kakuichi's style; both continued to flourish for roughly 100 years, the real high point of the biwa hôshi tradition, until the Ônin War broke out in the 1460s.

Roughly 500-600 biwa hôshi are believed to have been active in Kyoto around 1462, with most of them in the service of a single aristocratic family or individual. Following the Ônin War, however, the biwa hôshi and the Heike recitation tradition began to be eclipsed by Noh, kyôgen, and the narrative-monks known as katarisô, whose chief tale was the Taiheiki. The Yasaka-ryû then fell into decline, disappearing entirely around 1600, while the tradition based on Kakuichi's text and style went on to become the standard form of performance of the Tale of the Heike. The Ichikata-ryû which embraced that style received patronage from the Tokugawa shogunate, and continues to claim a number of performers today.

The standard heikyoku performance style involves relatively short and uncomplicated musical portions, during which the performer would not sing or chant, interspersed with portions of song or chanting during which the instrument would be silent. The instrument, for the most part, simply provided enhancement for the storytelling, by highlighting the beginning of a new chapter, raising the tension, or conveying the emotional tone for certain passages. A variety of different voices, melodic styles, or modes of chanting were mixed together to provide interesting variety, and appropriate modes for characters' differing personalities, and the differing tones or moods of scenes.