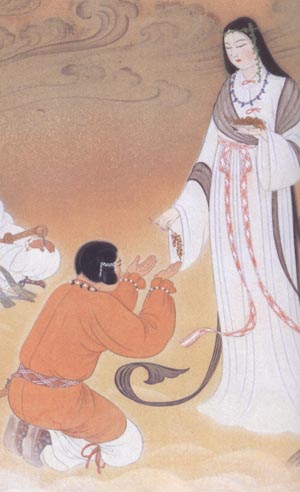 Amaterasu Ômikami is one of the chief deities in Japanese mythology. The Sun Goddess, she is considered the divine ancestor of the Imperial line, and of many of the other key members of the Shinto pantheon.

The chief deity enshrined at Ise Shrine, Amaterasu Ômikami was the daughter of Izanagi and Izanami, as well as the older sister of Susanoo no Mikoto. She was born from Izanagi's left eye and ordered to rule Takamanohara (the "plain of high heavens" where the deities are said to reside). Amaterasu then remained in Takamanohara, never truly descending to earth, while her grandson, Ninigi no Mikoto, crossed the Heavenly Bridge Ama-no-ukihashi, and took up residence on earth, bringing with him the Three Imperial Regalia which signal the legitimacy of an emperor's authority.

One of the most repeated stories featuring Amaterasu involves her hiding herself away in a cave, behind a large rock. As the story goes, when she became angry with a series of violent acts committed by her brother Susanoo, she hid herself inside of a cave (Amano Iwayato), depriving Takamanohara and the earth of sunlight. The great many (yaoyorozu) gods were worried and planned to trick her into coming out. Amaterasu was eventually lured out of the cave by music, dancing (including erotic performances), and general festivities enjoyed by the myriad of other deities. When she opened the cave out of curiosity and jealousy, a deity named Amano Tajikara Onokami pulled her out and blocked up the door, bringing light back to Takamanohara and the earth. 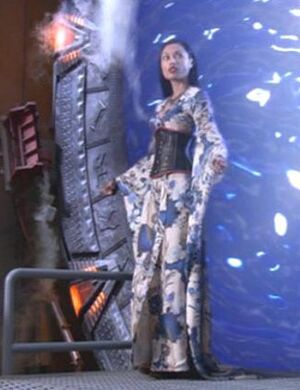 This article is a rough draft which is in need of cleanup (grammar, spelling, corrections, links, formatting, etc.). You can help SamuraiWiki by editing it. Click here for a list of articles that have been tagged as a draft copy.
Retrieved from "http://samurai-archives.com/w/index.php?title=Amaterasu_Omikami&oldid=35968"
Categories: