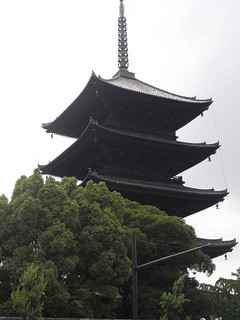 The pagoda at Tôji, the tallest wooden pagoda in the country.

The head temple of Shingon Buddhism, Tôji was recognized as a World Heritage Site in 1994 (along with a bunch of other sites as "Historic Monuments of Ancient Kyoto, Uji, and Ôtsu Cities"). It was originally constructed in 796, along with the move of the capital to Heian (i.e. Kyoto), just to the east of the Rashômon, to protect the eastern parts of the city (Sakyô). Tô-ji (lit. "East Temple") was originally paired with another temple, just across Suzaku-ôji, called Saiji (lit. "West Temple"); Saiji was destroyed by fire in 1233 and was never rebuilt. In 823, Tôji was bestowed to the control of Kûkai, made the head of the Shingon sect, and renamed Kyô-ô-gokokuji (Teaching King Protection of the Country Temple).

Under Kûkai, the temple was transformed into a monastery. Many famous monks resided there, as many members of the Court, kuge, and samurai, were strong adherents to Shingon. In the medieval period, the temple acquired a considerable amount of land. The temple was destroyed many times by fires set by attackers, but it was rebuilt each time.

The five-story pagoda (a National Treasure) was rebuilt in 1644, by Shogun Tokugawa Iemitsu, with a total height of roughly 55 meters. The one which stands today is the tallest wooden tower in Japan. The temple's kôdô (Lecture Hall), an Important Cultural Property, contains Buddhist sculptures organized around one of Dainichi Nyorai, and has become a treasure house of early Heian period Mikkyô (Esoteric) Buddhist sculptural arts. The Daishidô (Great Teacher Hall), a National Treasure, is also called the Miedô because it enshrines the shadow (or image) of the Great Teacher, Kûkai (shadow or image being a rough translation of the 'e' in Miedô); built as a residence for Kûkai, destroyed by fire in 1379 and rebuilt the following year, it is famous as one of the few remaining examples of shinden-zukuri architecture. Furthermore, the arrangement of the pagoda, kondô (Golden Hall; also a National Treasure, rebuilt in 1603, and a fine example of Momoyama period architecture), and other structures, continues today to represent the temple's layout at the time of its founding. Beyond that, the temple has in its collection many National Treasures in the forms of sculptures, paintings, documents, and craft / decorative art objects, making it a veritable treasure house of Buddhist arts.

The faith of the common people in (towards) Kûkai is also quite deep, and on the 21st of every month, a market is held in his name, and tens of thousands come. The numbers are especially strong in December, for the "Ending Kôbô."