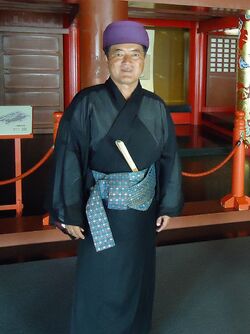 By contrast, the typical men's garment worn during official duties was a simple black robe, cinched at the waist. Known as kuruchô (黒朝, lit. "black court [robes]"), it was often made of extremely fine bashôfu fibers, woven so finely as to have a texture similar to silk.[4][5]

The colors of women's garments were also significant, indicating the rank of their husband or family. The queen and royal princesses wore goldish yellow silk or satin damask, a color long considered an Imperial color in China, while wives of anji or ueekata wore kasuri (ikat) fabrics, especially tsumugi, in green or pale blue (or yellow, for higher-ranking anji families). Pink kasuri garments indicated wives of those of peechin or satunushi status, while the wives of the chikudun, the lowest-ranking nobles, wore blue kasuri. The highest ranking noblewomen wore gold hairpins, while other noblewomen wore silver; commoners wore hairpins made of copper, brass, bronze, wood, or other materials. Deep blue garments dyed with indigo were standard among the commoner/peasant class; these were made of various materials, including bashôfu and cotton, but excluding ramie (jôfu), which was off-limits for commoners. Kasuri garments were worn by members of all classes, from the royalty down to the peasantry,[6] but particularly large kasuri patterns were limited to the aristocracy.[7]