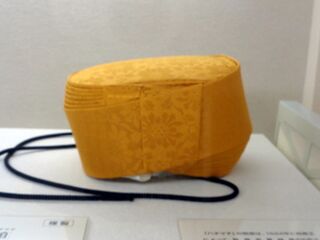 A yellow hachimaki on display at the Okinawa Prefectural Museum

The hachimaki is a type of court cap worn especially by officials in the government of the Ryûkyû Kingdom. Under a system established in 1524 under King Shô Shin, the color of the hachimaki indicated (in part) the court rank of the wearer.[1]

Originally, the system included six colors of headgear (purple, yellow, red, blue, green, black), covering everyone from the aristocracy down to the peasants; later, hachimaki came to be associated more strongly with only the aristocracy, while commoners wore hairpins indicating their status.[2]

The highest ranking members of the Ryukyuan aristocracy[3] wore a different type of court cap, called ukiorikan (lit. "floating embroidered cap"); those in the ranks immediately below them[4] wore purple hachimaki, and the lowest ranking nobles[5] wore red hachimaki, while everyone in the middle[6] wore yellow caps. Since the yellow caps were thus by far the most common, all such court caps were sometimes referred to as chiiru hachimachi, or "yellow hachimaki." Those without court rank who still were of a status enabling them to wear hachimaki wore ones in blue.[7]

The hachimaki was made from roughly thirteen feet of fabric, wrapped around an oval-shaped rigid board to form eight layers of wrapping, and secured to the head, worn over the topknot, with several ties and a pair of hairpins.

Those not yet old enough to have official court rank - and who thus could not wear a court cap indicating their rank - simply wore large hairpins stuck through their topknot, their status indicated by the material the hairpin was made of, and the ornaments on it. The crown prince and others of similarly high status would wear a golden hairpin called a jifaa, decorated with dragons and flowers, while the young sons or brothers of anji or other mid-to-high-ranking noble families would wear silver hairpins. Those associated with lower-ranking nobles wore copper hairpins. The narcissus flower in particular was a popular design for such hairpins. A system of rank as indicated by hairpins was also introduced by Shô Shin around the same time as the hachimaki ranking system, in the early 16th century, but did not settle into the gold, silver, brass system more standard in later periods until the 17th century.[2]