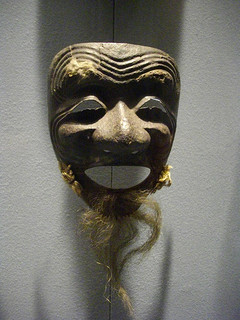 An iron warrior's mask based upon that worn onstage in Okina.
Metropolitan Museum.

Okina is a ritual dance performed prior to a program of Noh plays as an auspicious ritual of purification. The dance features a single performer in a distinctive "old man" (okina) mask.

The ritual, coming directly from sarugaku, contains significant influences from kagura and the Chinese Nuo (J: tsuina) rite, among others. Traditionally, prior to performing Okina, a performer would live away from his wife and family for a period, in order to purify himself in preparation for the ritual. In the actors' dressing room attached to the Noh stage, a small altar would be set up, where offerings of rice and saké were set up, and a box containing the mask and fan to be used in the dance would be arranged there as well. Just prior to the performance, the Okina actor and the rest of the troupe would then drink saké together and perform a purification ritual for the success of the performance.

The Okina dance itself shares some features with "god plays" (kami nô), aka category one Noh plays, but is typically considered separately, as a special case unto itself.

A version of the dance is performed in similar contexts in the Kabuki theatre, such as at the beginning of a new theatrical season, as an auspicious ritual dance calling for peace for the realm and prosperity for the theatre.[1]