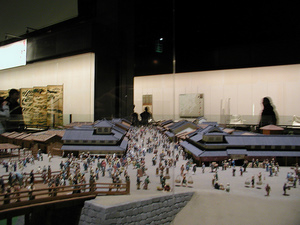 Nihonbashi is a bridge in Tokyo at the center of one of the country's most major commercial districts. Originally built in 1603 as a huge and iconic wooden bridge, Nihonbashi was the official starting point of the Gokaidô (five major highways of Edo period Japan), and the point from which all distances to/from Edo (and now Tokyo) were officially measured. The bridge was at the center of one of Edo's chief merchant districts; in the Meiji period, the wooden bridge was replaced with a stone one, decorated with bronze street lamps in the style of the time. The district is known in particular as the location of the honten, or main branch, of many of Japan's major department stores, as well as many other major commercial establishments.

The bridge's name, Nihonbashi, was originally written with the characters 二本橋, meaning "two bridges" (or perhaps referring to the bridge's double-width). The bridge was less than 50 meters long, but was remarkably wide, allowing a great many people to cross at once, and making the bridge a center of activity.

When the bridge was renovated in 1659, following the 1657 Great Meireki Fire, the new name 日本橋 took root, indicating an association of the bridge with the entire realm, and marking the bridge and its construction as a major symbol of Edo's importance and newly central location. It was at this time as well that the shogunate officially made Nihonbashi the official center of the city, and the point from which distances were to be measured.[1]

The bridge curved high in the center, and provided views of Edo castle to the west, along the waterway, which was lined with official shogunate storehouses; Mt. Fuji was often visible in the distance, behind the castle.