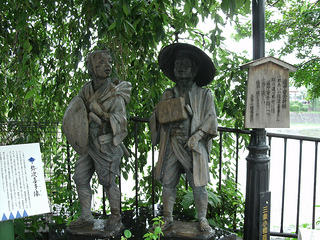 Statues in bronze of Yaji and Kita, the main characters of Ikku's "Shank's Mare," at Sanjô-Ôhashi in Kyoto. By sculptor Koyama Yoshihisa, 1994.

Jippensha Ikku was an Edo period writer, known today chiefly for his work Tôkaidô dôchû hizakurige, originally published in a serial fashion between 1802 and 1809, and commonly referred to in English as "Shank's Mare."[1]

Ikku was born the son of a low-ranking official in Suruga province as Shigeta Ichiku, taking the adult name Sadakazu, followed by the pen-name Jippensha Ikku later in life. He was raised by a different elite family in Edo, and came to hold a minor official position in Edo himself, before relocating to Osaka in 1791, at the age of 26. There, he entered the service of one Odagiri Tosa-no-kami Naotoshi. He remained there for only six or seven years, during which time he wrote a number of plays, and married the daughter of a timber merchant, becoming adopted into that merchant family as the heir.

After having that marriage dissolved, Sadakazu returned to Edo, where he married and divorced again, before marrying for a third time. This marriage lasted somewhat longer, and Sadakazu, now beginning to use the pseudonym Jippensha Ikku, began to make a living writing stories for publication.

In 1802, he began producing the story of Yajirôbei and Kitaroku, a pair of Edo commoners making their way to Osaka along the Tôkaidô. The story was published in parts from 1802 until 1809, by which time it was enjoying great popularity, and had inspired the publication of numerous imitations. In light of this success, and popular demand for more such stories, Ikku produced tales of the journeys of Yaji and Kita to Konpira-san in 1810, and to Miyajima in 1811. He then wrote a series of tales of Yaji and Kita's adventures on the Kiso kaidô, which were published beginning in 1812, and completed in 1822; in 1814, Ikku also wrote a prequel, or prologue, to the original story, explaining why Yaji and Kita departed Edo to begin with, though there are some discrepancies in the characters' biographies between this prologue and the original tale.

Ikku's home, along with a significant portion of the city of Edo, was destroyed by fire in 1830; Ikku recovered, and began publishing yet another Yaji & Kita story the following year. Before he was able to complete the second part of that latest tale, however, he fell ill and passed away. His ashes were buried with a tombstone at Zenryû-ji in the Asakusa neighborhood of Edo; a monument to his memory was then erected by his family three years later at Chômei-ji in Mukôjima, just across the river from Asakusa.