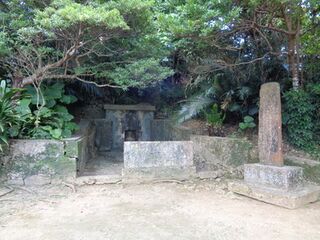 Iha Fuyû, or Ifa by the Okinawan language pronunciation of his surname, was a pioneer and leader in the field of Okinawan Studies. He was a fierce advocate for the idea that Okinawan and Japanese people, and cultures, came from the same origin, and that with Okinawa prefecture now being a part of Japan, assimilation was the best path.

Ifa was born on February 20, 1876, in the Nishi neighborhood of Naha; his family was part of the Gyo (魚) lineage of Naha aristocracy and their home was well-known locally as belonging to a family of wealth or status.[1] In 1895, Ifa was attending Okinawa First Prefectural Middle School (on the former site of the Crown Prince's mansion) when a strike took place against the abolition of English-language classes; Ifa was identified as one of the ringleaders and was expelled from the school. He then traveled to Kyoto, where he attended Kyoto Third High School (today, Kyoto University). He entered Tokyo Imperial University in 1903, where he majored in linguistics.

He graduated in 1906 and returned to Naha, where he began to compose one essay after another on Okinawa-related subjects, joining the vanguard in Okinawan Studies. In one of his earliest essays, "The Establishment of [Okinawa] Prefecture Viewed from Evolutionary Theory" (written 1909, revised 1942), he draws upon the racial and evolutionary theories prominent at the time, arguing that because of Ryûkyû's small size and relative isolation, Ryukyuan people had not been able to intermix with other peoples very much, and suffered from a degree of inbreeding, resulting in their short stature and certain other features; but that the people of Shuri and Naha had intermixed with Chinese and other peoples (ta jinshu) to a somewhat greater extent, resulting in their slightly superior physical attributes. For this reason, and because annexation to Japan and the advent of modernity would introduce numerous new philosophies and religions into Japan, Ifa argued that the abolition of the Ryûkyû Kingdom and its annexation into Japan was a positive development for the Okinawan people; he wrote that the Zhu Xi-style Neo-Confucianism which had dominated the royal court had "poisoned" the kingdom, and the people, intellectually. This disparaging attitude towards Confucianism (as a backwards philosophy which had held East Asia back from becoming more "modern" earlier, or more quickly) was also a product of Ifa's time, a common attitude in both Japanese and Chinese intellectual circles at the time.[2] Similarly, Ifa wrote in his 1910-1911 essay Ryûkyû jinshu ron ("On the Race/Ethnicity of Ryukyu") that the Ryukyuans were fundamentally of the same race or ethnicity (J: jinshu) as the Japanese, and that for today's Ryukyuans, quick assimilation (J: dôka) with the Japanese was the best path. All in all, Gregory Smits describes Ifa's theme as an intention to explain to Japanese readers that Okinawans were not an inherently inferior race, but simply had been shaped by unfortunate historical circumstances, and that given the proper education and opportunities, they could grow to become just as modern, just as civilized, just as physically and intellectually capable, as any Japanese, a message of great political import at the time.[2]

In 1910, Ifa was named the first director of the Okinawa Prefectural Library; in addition to overseeing the collection of documents and other materials, he traveled around the islands giving more than 300 lectures.

Ifa published his first book, Ko-Ryûkyû ("Old Ryukyu"), in 1911, collecting up many of his earlier essays. From that time forward, he engaged with fellow Okinawa Studies scholars Majikina Ankô, Higaonna Kanjun, and others, pioneering the field.

A number of prominent anthropologists and folklorists (minzokugakusha) from the mainland visited Okinawa and met with Ifa and others beginning in the 1920s. This included Yanagita Kunio in 1921, and Orikuchi Shinobu, who visited Okinawa in 1921 and again in 1923. Yanagita convinced Ifa to travel to Tokyo in 1925, where he stayed for some time, devoting himself to the study of the Omoro sôshi, and taking part in symposiums and research meetings held by Yanagita. Ifa also attended meetings on Ainu Studies in Tokyo, and began his own colloquium to discuss the Omoro sôshi. Over the course of 1925-26, he published four books.