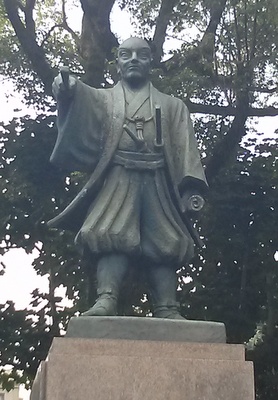 Statue of Hirata at Hirata Park, Kagoshima, on the former site of Hirata's home 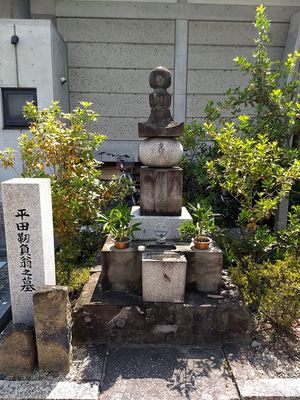 Hirata's grave at Daikoku-ji in Fushimi

Hirata Yukie was a prominent Satsuma han retainer, most known for leading thousands of workers from Satsuma in a public riparian works project ordered by the Tokugawa shogunate to help prevent destructive floods of the Kiso River.

He was born in Hiranochô, Satsuma province, in 1704. He went through a number of names, including Munetake, Masasuke, Heizô, Heijûrô, and Kamon before taking on the name Yukie. He inherited his father's official position at age 31, and worked at the Satsuma han mansion in Edo for a time before being named jitô of Isaku and Ôguchi, Ômetsuke, and finally karô.

The shogunate ordered Satsuma in 1753 to provide labor for a riparian project working to prevent flooding near the convergence of the Kiso, Nagara, and Ibi Rivers in what is today Gifu prefecture; providing such labor was a central element of any domain's fulfillment of its feudal obligations to the shogunate. Hirata was appointed by Shimazu Shigetoshi to oversee the project, and the 1,000 men sent from Satsuma to do the work. He took out a loan of 220,000 ryô from an Osaka-based merchant, but the project encountered significant difficulties. After the first set of levees was finally completed, the river simply destroyed them. Disease set in, killing many of the workers, while others died in accidents on the job; a number committed suicide, whether out of desperation because of the difficulty of the work, or out of shame for the failures of the project. Eighty-four men died before the project was finally completed, a year and three months later, at a total final cost of 400,000 ryô. Taking responsibility for the failures of the project, for its high costs in both money and lives, Hirata then committed seppuku himself. He was buried at Daikoku-ji in Fushimi.

A monument to Hirata stands today in Hirata Park in Kagoshima, while another monument, to the men lost, was erected in 1920 just outside the former grounds of Kagoshima castle. Chisui Shrine in Gifu prefecture, along the Kiso River, is also dedicated to the memory of Hirata's men.