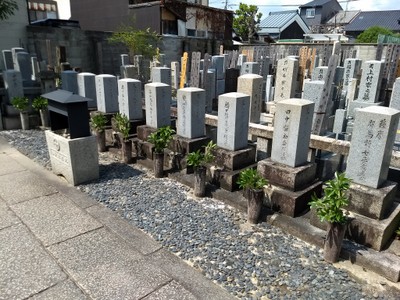 Daikoku-ji is a Shingon temple in Fushimi dedicated to the worship of Daikokuten, and closely associated with Satsuma han.

The temple is said to have been founded by Kûkai. Originally called Chôfuku-ji, it was patronized by a number of prominent samurai figures including Toyotomi Hideyoshi before becoming more exclusively associated with the Shimazu clan.

Around 1615 its name was changed to Daikoku-ji, in reference to its association with Daikokuten, one of the Seven Lucky Gods. The Satsuma han mansion was, at that time, located nearby (though it would be moved closer to the center of the city later in the Edo period), and the domain adopted this temple, and its chief deity, as protectors of its daimyô. Due to this association, the temple has come to be known popularly as "Satsuma-dera" ("Satsuma temple").

During the Bakumatsu period, the temple was the site of notable conversations between Saigô Takamori and Ôkubo Toshimichi.

Nine shishi (anti-shogunate rebels / pro-Imperial patriots) from Satsuma,[1] killed in the Teradaya Incident, are buried at Daikoku-ji, along with Shimazu clan karô Hirata Yukie and two members of the 1832 Ryukyuan embassy to Edo: the mission's gieisei (head of street musicians) Gima peechin (Sai Shû, 1777-1832) and sangikan (head of ceremonies) Takehara peechin, who fell ill and died on the way to Edo. A monument to the nine shishi is said to have been commissioned originally by Saigô Takamori.