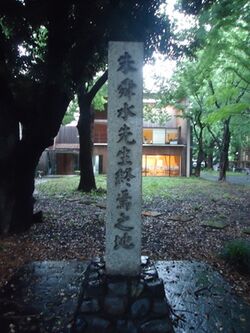 A monument to Zhu at the College of Agriculture, University of Tokyo main campus

Zhu Shunsui was a Ming loyalist who became a prominent Confucian scholar in Japan, after fleeing there following the fall of the Ming Dynasty.

Zhu was originally from the town of Yuyao in Zhejiang province. During the fall of the Ming Dynasty, Zhu journeyed to Japan four times; he also met with Coxinga and attempted to secure Japanese aid for combatting the Qing, but was ultimately unsuccessful.

He left China and arrived in Nagasaki for the first time in 1642. For the following two years, he spent time in Nagasaki, Quang Nam (Vietnam), and Ayutthaya (Thailand), among other places, seeking aid against the Manchu threat. In 1644, as Beijing fell, he gave up, settling more permanently in Japan. In Nagasaki, he came to live together with Andô Seian, a Confucian scholar in service to Yanagawa han (Chikugo province).

In 1665, Tokugawa Mitsukuni, lord of Mito han, then invited Shunsui to become a scholar in his service, and to take up residence within the domain's naka yashiki mansion in the Hongô area of Edo (today part of the Faculty of Agriculture campus of the University of Tokyo). Zhu played a significant role in the birth and development of Mitogaku (the Mito school of historical philosophy), and in the Mito project of the Dai Nihon Shi. His students included Kinoshita Jun'an and Asaka Tanpaku. Impressed with his scholarship and service, Mitsukuni granted Zhu a posthumous name, Wéngōng (J: Monkyô). Shunsui was his scholarly pseudonym (C: hào, J: gô).