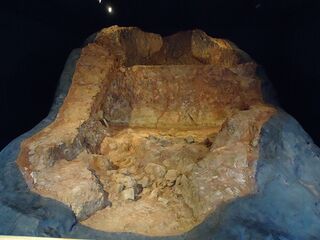 Wakuta kiln on display at the Okinawa Prefectural Museum

Wakuta was a village in central Okinawa, which served as the chief center of pottery production in the Ryûkyû Kingdom until many of the kilns were ordered moved to Tsuboya in 1682. The village was later absorbed into the city of Naha, and the Okinawa Prefectural Government offices are today located in the area.

Wakuta was a major center of the production of both unglazed arayachi and glazed jôyachi wares, as well as Okinawa's distinctive red terracotta roof tiles. Its techniques gained a boost in 1616 as a number of Korean potters settled in the neighborhood.

Excavations conducted in concert with the construction of the prefectural government offices in 1986-1987 recovered six of the decommissioned kilns. One is today maintained at the Okinawa Prefectural Museum, and another at the Tsuboya Pottery Museum.