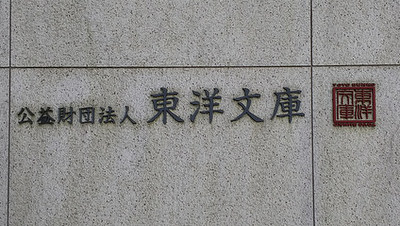 The logo of Tôyô Bunko, on the wall outside of the building

The Tôyô Bunko (lit. "Oriental Archives") is a large Asian Studies library in Bunkyô-ku, Tokyo, one of the world's largest, with a collection of roughly 700,000 volumes in both European and Asian languages, covering topics ranging across all of Asia.

Its origins lie in a collection of some 45,000 China-related books obtained by Baron Iwasaki Hisaya, third head of Mitsubishi and eldest son of the company's founder Iwasaki Yatarô, in 1917, from Australian journalist George E. Morrison. As Morrison's collection covered only Chinese topics, and only included volumes in European languages, Iwasaki worked to expand the library's holdings of books in both Western and Asian languages on Japanese, Indian, and other Asian topics. Today, the library holds some 700,000 volumes.