Taga-jô was an early stockade fortress located in the plains to the northeast of Sendai. It watched over an area extending from flatlands about 4 meters above sea level, to hills 50 meters high.

The area of the "castle" was around 900 meters square, and was encircled by earthworks and wooden stockades forming an irregular rectangle. At the center of this wide area was a set of administrative structures covering about 100 square meters. These included both offices and soldiers' barracks.

The fortress was originally built in 724, but was burned down in the 780 Ijinokimi Asamaro Rebellion, and was rebuilt in the early Heian period. 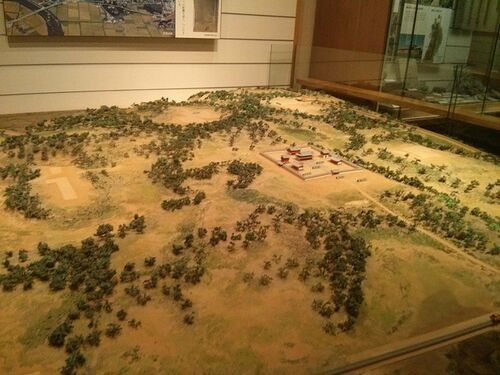 A model at the National Museum of Japanese History of the Taga fortress, as it may have appeared in the early Heian period. Note the stockade walls at the bottom right of the photo, and the small center of administrative buildings & residences at the center.