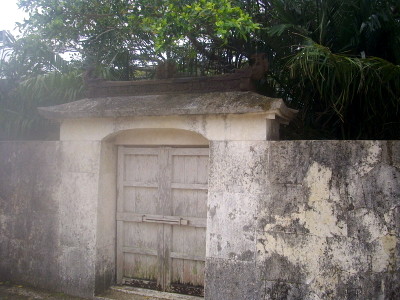 Suimui utaki was the chief sacred space (utaki) at the center of Shuri castle, the royal palace of the Ryûkyû Kingdom. "Suimui" was also a frequent metonym for the castle or the royal capital as a whole in texts such as the Omoro sôshi.[1]

Suimui was one of ten sacred spaces within the palace grounds known collectively as totaki ("ten [u]taki).

Contained within a small set of stone walls in the shicha-nu-unaa, or second plaza, near the central areas of the castle, the utaki contained banyan (gajumaru) and Formosa palm (kurotsugu) trees. The king of Ryûkyû regularly performed prayers here for a safe journey whenever leaving the castle, and noro associated with the court performed a number of other rituals at Suimui as well.

Archaeological excavations prior to the 1992 postwar restoration of the gusuku, aimed at finding remains which might be useful for the restoration of the utaki, however, discovered very little. Scholars believe the utaki may have been deliberately destroyed in the late 19th century as part of efforts to extinguish Ryukyuan state religion, including veneration of the (former) royalty.[2]

Following the restoration of the castle in 1992, Suimui utaki was restored in December 1997.