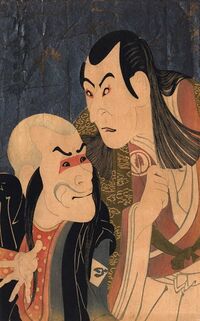 The Kabuki actors Bandô Zenji (on the left, in the role of Onisadobo) and Sawamura Yodogorô II (on the right, as Kawatsura Hogen), in the play Yoshitsune Senbon Zakura ("Yoshitsune and the Thousand Cherry-Trees"); 1794/5.

Sharaku is one of the most mysterious ukiyo-e artists. He was active for only ten months, between 1794 and 1795, producing a number of designs, of which roughly 160 are extant today. His designs are bold, reflecting a very individual style, which has been much praised and lauded, but very little is known of his life or background.

Some sources indicate he was a Noh actor in the service of the daimyô of Awa province, by the name of Saitô Jûrôbei. Scholars have debated his identity, some asserting that "Sharaku" was simply a pseudonym for another, more well-known, artist such as Hokusai[1], though others have argued against these claims. Sharaku had, in any case, a relationship with the publisher Tsutaya Jûzaburô, who published all of his work.

His style shows some influence from that of Katsukawa Shunshô, though it is also boldly unique. Sharaku builds upon the trends towards realism prevalent at the time, and Shunshô's introduction of individualized, differentiated faces, taking these both to the extreme, to create actor portraits both quite individualized, and hyper-realistic to the point of caricature.

Ukiyo-e expert Richard Lane cites influence evident in Sharaku's work not only of the style of Katsukawa Shunshô, but also of the large heads and dramaticly cropped headshot portrait mode of Ippitsusai Bunchô, Katsukawa Shunkô, and Katsukawa Shun'ei, as well as the influence of the Kamigata artists Suifutei and Ryûkôsai.