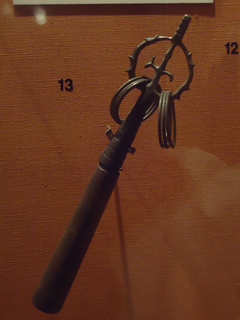 The shakujô topper for a monks' staff, on display at the Metropolitan Museum of Art

A shakujô is a type of staff, or just a device that tops such a staff, typically associated with wandering monks or those on pilgrimage. It consists of a serious of metal rings, which jingle as the monk walks, supposedly in order to alert insects and other living beings of the monk's passage, so they might get out of the way, and thus prevent him from unintentionally harming any living creature.

This article is a placeholder or stub. You can help SamuraiWiki by expanding it.
Retrieved from "http://samurai-archives.com/w/index.php?title=Shakujo&oldid=26009"
Categories: