Yoshishige (whose rank was Hitachi no suke) was the eldest son of Satake Yoshiaki (1531-1565) and held Ota castle in Hitachi province. His father, whose health was failing, handed over leadership to Yoshishige in 1562 and died three years later. An aggressive lord, Yoshishige consolidated the Satake's hold over Hitachi and fought with such local houses as the Ashina, Oda, Naya, et cetera... While he would take Shirakawa castle from the Yuki, Yoshishige's primary concern was to be the Hojo family. Allied with the Satomi and Utsunomiya, Yoshishige resisted Hojo expansion into the eastern Kanto for many years. In the mid-1580's, Yoshishige also became involved in actions against Mutsu's rising star, Date Masamune. He allied with the Ashina and Soma (both former Satake rivals) and contributed his strength to their war with the Date, with Satake troops fighting at the Battle of Hitadori Bridge (1585). Yoshishige handed official control of the Satake to his son Yoshinobu in 1589 but remained effectively in command afterwards. The Satake submitted to Toyotomi Hideyoshi in 1590 and sent their forces to assist in the Odawara Campaign. When sides were being drawn up in 1600 between Tokugawa Ieyasu (the Satake's powerful neighbor in the Kanto since 1590) and Ishida Mitsunari, Yoshinobu waffled. He at first decided to join Ishida's cause and sent messages to Uesugi Kagekatsu, then, at the last moment, hesitated and made is if to join Tokugawa. In the aftermath of the Battle of Sekigahara, Yoshishige was able to intercede on behalf of Yoshinobu when the latter was set to be punished by Tokugawa Ieyasu for his indecisive behavior. The Satake were only made to transfer to Akita in 1602 - albiet at the cost of over half their income (from 545,000 koku to roughly 200,000 koku). Yoshishige afterwards lived in Rokugo castle. 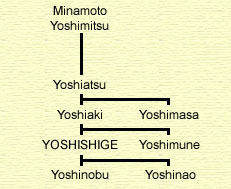 Yoshishige was known as a tough campaigner and carried the nickname Oni Yoshishige (Devil Yoshishige). There remain many anecdotes on the life of Yoshishige. For example, it is said he did not use a futon to sleep on, instead preparing only a thin mat. Possibly he began this custom because he was always devoting himself to war, and thus spent many nights in the field with his army. After he moved to Rokugo, his son Yoshinobu, concerned for his comfort in the cold climate, sent a futon for him to use. Out of respect for his son, Yoshishige attempted to sleep on the futon but found himself unable to get comfortable. He therefore went back to his old campaigning mat and, we may assume, slept restfully.