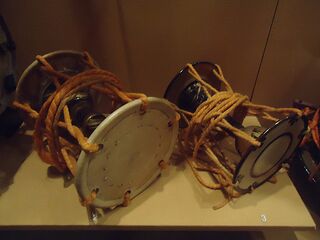 An ôtsuzumi (left) and kotsuzumi (right) on display at the Metropolitan Museum. The two are typically played alongside one another.

The ôtsuzumi, also known as a hip drum, is commonly featured in Noh, kabuki, nagauta, geza, and a variety of other forms of traditional and folk music. Generally paired with the kotsuzumi (shoulder drum), the ôtsuzumi is the larger of the two, and has a thicker skin.

The instrument is generally made of cherry wood, with horsehide used for the skins, attached by iron rings. The skin is quite susceptible to changes in temperature and humidity, and so performers will sometimes apply heat to the drumhead during performance in order to dry it out. This is in contrast to the kotsuzumi, which often has to be moistened to achieve the correct tone.

The ôtsuzumi is typically held with the left hand, on the left thigh while seated (typically in seiza), and struck with the fingers or "heel" of the palm of the right hand.