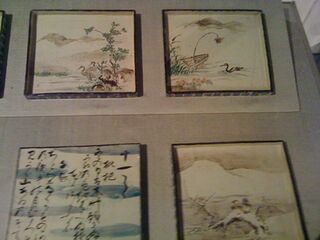 Four of a set of 12 dishes, produced and decorated by Kenzan, depicting themes of the twelve months of the year. Collection of LACMA.

Ogata Kenzan was a significant Edo period ceramics artist, famous too as a poet, calligrapher, and tea ceremony aficionado. Along with his elder brother, the painter Ogata Kôrin, he may be considered a co-founder of the Rinpa school of art.

His father Ogata Sôken died in 1687. Originally named Ogata Gonpei, and also known as Shinsei, he took on the art-name Ogata Kenzan in 1699. That same year he had a kiln built in Narutaki near Ninna-ji (on the outskirts of Kyoto), and began producing ceramics.

In 1709, Kôrin returned to Kyoto, and began collaborating more closely with Kenzan once again. Kenzan then relocated from Narutaki to central Kyoto in 1712, and began focusing more on decoration than on ceramic production, ordering ceramic blanks from area kilns rather than making his own.

It is unclear how much longer he remained in Kyoto, with some sources indicating he was in Edo from 1711 to 1734, and others that Kenzan moved to Edo in 1731. In any case, he entered the service, or perhaps merely the circle, of the abbot of Kan'ei-ji, and established a kiln at Iriya. The local Rotary Club today maintains a marker or sign, noting the former location of that kiln.

He died in 1743 at the age of 81, and was buried at Zen'yô-ji in Edo's Shitaya Sakamoto neighborhood. However, over the years, his grave fell out of memory, until Sakai Hôitsu sought it out and discovered it in 1823, erecting a new stone marker. Four years earlier, Hôitsu had overseen restoration efforts at Kôrin's grave. Zen'yô-ji moved to a new location, in Toshima-ku, when Ueno Station was expanded in the late Meiji period (c. 1900-1912), and Kenzan's grave marker came to be located in the gardens of the Kokka Club, in Uguisudani. Then, in 1921, it was moved to Kan'ei-ji, being moved once again sometime afterward to Zen'yô-ji's new location in Tôshima-ku. Meanwhile, in 1932, memorial markers for Kenzan were re-erected at Kan'ei-ji, where they are still visible today.

Plaques at Myôken-ji (the site of Kôrin's grave) in Kyoto, however, claim that Kenzan's grave is located there.[1]