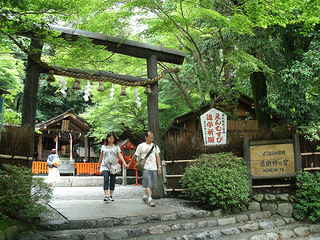 Nonomiya Shrine is a Shinto shrine in the Arashiyama area of the city of Kyoto, near the Buddhist temple Tenryû-ji.

Historically, Imperial princesses were sent to Ise Shrine to serve as shrine maidens, known as saigû, or "Ise Vestals," first spent a year within the Imperial Palace, and then three years at Nonomiya, ritually purifying themselves in preparation for entering service at Ise Shrine.

Due to its association with Ise Shrine, and its need to be a place of particular purity, during the Heian period, the shrine was rebuilt with each imperial reign. In the Nanbokuchô Period, the shrine was temporarily dismantled, but later rebuilt, with a torii in black wood, and a brushwood fence, two features which came to be strongly associated with the site.

The shrine appears in the Tale of Genji, and as a result, in the Noh play Nonomiya, in waka poetry, and elsewhere, referencing the events of that episode of the Genji, in which Prince Genji visits one such Imperial princess, the daughter of Lady Rokujô, who is purifying herself at the shrine.

Today, the shrine is dedicated to Amaterasu, and to the fire deity. The shrine's torii gate, made traditionally of beams of a black wood called kunuki with the bark still on, is said to represent the original, oldest form of historical torii.