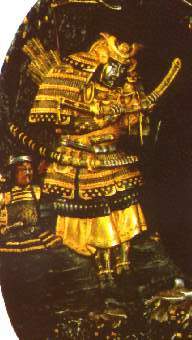 Nitta Yoshisada prepares to throw his sword into the sea as an offering so that the gods will roll back the tide and let his army pass.

Nitta Yoshisada was a loyalist warrior who hoped to restore the ancient prosperity of his house by answering the call to arms by Emperor Go-Daigo. His house was descended from the senior branch of the Minamoto. Because his ancestors had refused to join Minamoto Yoritomo promptly in the early days of the war against the Heike, the Nitta were never given important posts in the Kamakura government. On 7 May, 1333, a concerted attack by many armies attacked Kyoto in order to restore Go-Daigo to the throne, and on 21 May, forces led by Yoshisada captured Kamakura. On the 24th, Hojo Hidetoki, the military governor of Kyushu, was destroyed by rebellious local families, including the Shoni and Otomo. Go-Daigo was able to re-enter the capital on 5 June, 1333. Shortly thereafter, Nitta was appointed by Go-Daigo Governor of Echigo province, and Vice-Governor of Kozuke and Harima provinces. When Ashikaga Takauji began attempting to overthrow Go-Daigo (after first helping him to regain the throne), Nitta led the resistance against him. Yoshisada was considered an ineffectual military leader by Kusunoki Masashige, who suggested to Emperor Go-Daigo to have Yoshisada killed, and make peace with Ashikaga Takauji. Yoshisada was killed in battle in 1338.