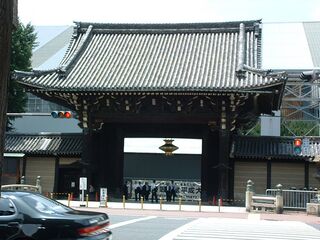 The main gate to Nishi Hongan-ji

The Honganji, established in 1321, was for centuries one of the most powerful temples in Japan. It was split in half, into East and West (Higashi and Nishi) in 1602, in a political effort to weaken the temple, though both remain quite famous and prominent today.

In addition to its many religious buildings, the Nishi Honganji complex includes bathing facilities originally constructed for Toyotomi Hideyoshi's Jurakutei.