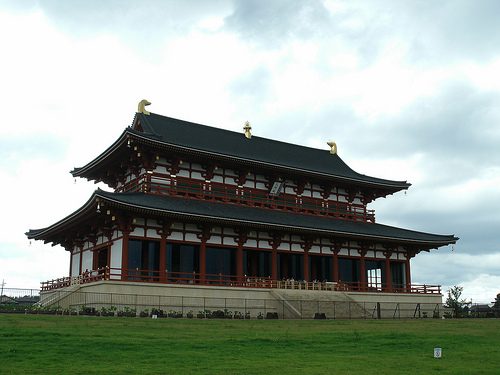 Model of the inner palace compounds, at the National Museum of Japanese History

The Heijô Imperial Palace, in Heijô-kyô (today, the city of Nara), served as the Imperial Palace from 710 until 784. Like other early Japanese Imperial capitals, the palace and its surrounding city were based closely on Chinese models.

The Imperial capital was moved to Heijô from Fujiwara-kyô, roughly 20 km to the south, in 710. It was then moved to Nagaoka-kyô in 784, and the palace was abandoned, left to fall into ruin; nothing remains today except some earthenwork foundations, but the Suzakumon (the main southern gate) was rebuilt in 1998, and the Daigokuden (Great Audience Hall) in 2010.

The palace compound occupied an area roughly 1100 yards from north to south, and roughly 1300 yards from east to west, within the northern portion of the city, facing south. Gates known as the Gaimon (Kyûjômon), Chûmon (Kyûmon), and Naimon (Kômon) punctuated three sets of packed earthen walls (moving from outer to inner). Beyond the Kômon stood the complex of buildings known as the Dairi ("Palace").[1] The Daigokuden, completed in 715, was originally located in the center of the entire palace complex, but later in the 8th century, the complex was expanded out to the east. The name Daigokuden refers to the North Star, and to the foundation of the universe. Other structures within the complex included the Chôdôin (central administrative offices), imperial residence, pleasure gardens, and a number of libraries, storehouses, offices, and studios, as well as kitchens and breweries. The palace was surrounded by walls thirty feet tall, but was accessible by a number of gates, chief among them the Suzakumon, linking the compound to the city's 81-yard-wide north-south boulevard, Suzaku-ôji.[2]

No documentary sources have survived indicating the appearance of the palace, but archaeological research, along with consideration of what is known about the palace at Kuni-kyô (capital very briefly in the 740s) and other contemporary structures, such as Yakushi-ji and Hôryû-ji, as well as information about the Heian Imperial Palace, has allowed scholars to infer much.

Additional construction later in the 8th century destroyed much of what archaeological research might have otherwise found about the original (early 8th century) Heijô Palace, but enough has been found to confirm the ground dimensions of the original Daigokuden.

The Hall is believed to have been painted chiefly in an imperial vermillion, with numerous golden and other metal fittings; these served the double purpose of contributing to the palace's impressive appearance, and protecting the wood from rot. The building itself is believed to have been a two-story structure, with a hipped-gabled roof covered in roughly 100,000 blackened ceramic tiles.

The throne, or takamikura, is believed to have been seated within a hexagonal compartment, open towards the south. The southern facade of the hall was open, allowing the Emperor, seated on that throne, to face south out over a plaza where courtiers, visiting emissaries, and the like would gather; the Halls of State, where administrative matters were handled, were also located to the south of the Daigokuden. Here, the Emperor oversaw governmental decisions, banquets, receptions for foreign envoys, New Year's celebrations, and other such events. Most of the other major buildings in the complex were located to the east.

The Suzakumon sat at the southern end of the complex, directly to the south of the Daigokuden; the main north-south avenue of the city, called Suzaku-ôji, extended southward from this gate.

Other structures within the palace complex included the Imperial residences, known as the Dairi, agencies for governance and administration, known as the sôshi, sites of national ceremonies, and teien (gardens), used for banquets. The complex was surrounded by large walls, and contained 12 gates in total.

Ancient documents, extant artifacts, and archaeological research were taken into account in the rebuilding of the Suzakumon and Daigokuden. The latter was completed in time for considerable celebrations conducted in 2010, on the occasion of the 1300th anniversary of Heijô/Nara having become the capital in 710. The rebuilt Daigokuden is 53.172 meters long from east to west, 28.653 meters from north to south, and 23.345 meters tall, atop a foundation platform that is 3.574 meters high. The whole thing is 29.014 meters high at its highest point (the golden shibi mounted on the roof).

No documentary sources survive indicating the interior appearance, but, based on what is known about the Chinese Imperial Palaces, and other related sites, it was painted mainly in red and blue-green, with images of lotuses, the twelve animals of the Chinese zodiac, and the symbols of the Four Directions. The bluish-black tinge of roof tiles excavated at the site was recreated by painting the tiles in a loose black clay with a high concentration of iron, and then fired for around two days, at a temperature of around 1100 degrees. No signs of golden shibi - golden guardian fish adorning the roof - have been found in excavations, but as it is known they were quite standard at that time, shibi roughly two meters tall have been installed atop the reconstructed Daigokuden.

To the south of the Daigokuden, several slightly raised platforms of earth, ringed in stone, remain from the original palace construction. Circular base stones that once supported wooden pillars are visible, revealing the size and shape of the original palace buildings, which would have been constructed around a grid of evenly-spaced pillars, still a key element of Japanese traditional architecture today.