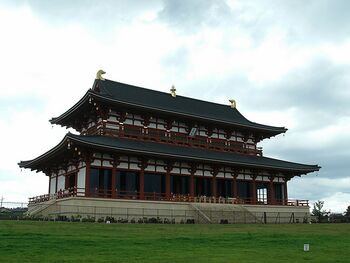 Heijô-kyô, the city today known as Nara, was the Imperial capital of the Japanese state from 710 to 784.

At that time, the city boasted a population of roughly 100,000, with about six million living elsewhere within the state's territory. The city was modeled after the Tang Dynasty capital of Chang'an, albeit on a smaller scale, and constituted a grid of streets roughly three miles from north to south and three and a half miles from east to west. The palace was located within the northern, central part of this rectangle, facing south, the standard orientation in Chinese tradition as well; the Emperor was associated with the North Star, and faced south towards his subjects. Sections of the city were divided by class, with political elites living closer to the palace, and commoners living further away.

As at Chang'an, and as would later be the case at Heian-kyô (modern-day Kyoto), a grand boulevard known as Suzaku-ôji ("Suzaku Avenue") ran directly north-south, dividing the city into even eastern and western halves. At Heijô-kyô, this boulevard was roughly 81 yards wide, and ran directly from the southern gate of the city as a whole to the southern gate (Suzakumon) of the Imperial Palace compound. It served not only as a main thoroughfare for everyday activity, and for formal processions, but also as a fire break, helping to protect either side of the city from destruction, should a fire break out in the other half.

Each half of the city had a central marketplace, where both local goods and goods imported from further away were bought and sold. The city was connected to Naniwa (modern-day Osaka) via canals and river transport systems, and beyond that to the rest of the archipelago chiefly by sea routes. Goods were purchased at market chiefly by barter, though copper coins minted by the state also circulated.

The two Buddhist temples Tôdai-ji and Kôfuku-ji were major religious and political presences in the city.