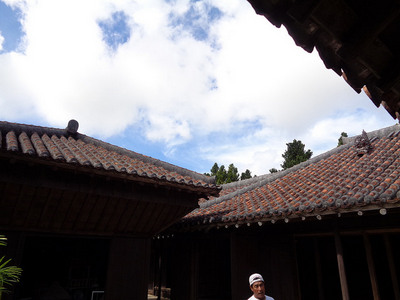 The red terracotta tiled roofs of the Nakamura House 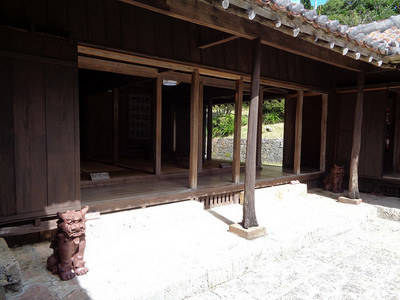 View of the front of the house, with a wooden walkway, and the ichibanza and nibanza beyond it 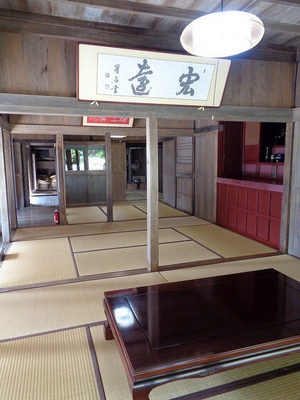 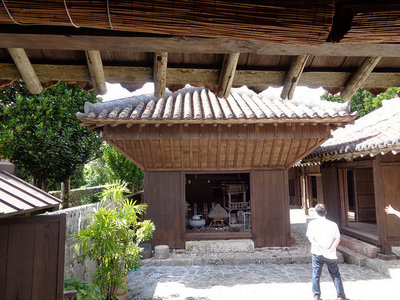 The takakura storehouse, seen across the courtyard from the asagi annex 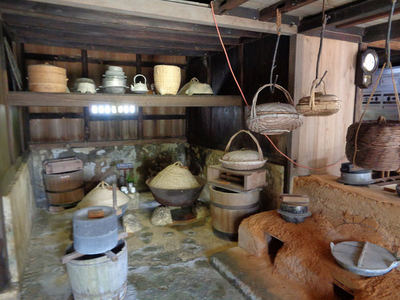 A view of the earthen-floored kitchen, or doma 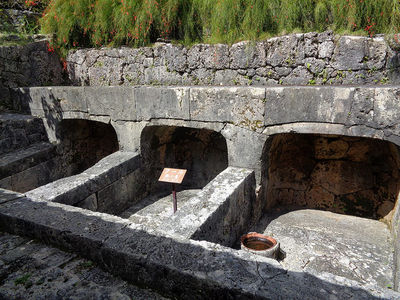 The Nakamura House in Nakagusuku village on the island of Okinawa is a prominent surviving example of early modern Okinawan architecture - specifically of a wealthy villager's home. It became a nationally-designated Important Cultural Property in 1972.

The home as it stands was originally built around 1720, but was later repaired and renovated a number of times, today displaying the red roof tiles, hardwood floors, and tatami mats that were once common only among the elite classes, and that became more widely accessible only in the Meiji period. Still, considerable elements of the basic structure, construction methods, and layout of the house are indicative of early modern and even medieval Okinawan architecture, borrowing much from both Muromachi period Japanese and Ming Dynasty Chinese architecture.

The stone walls of the property encircle an area roughly 1,557 meters square, which contains the main house, an elevated storehouse (takakura), a barn, stone pig pen (furuu), well, and gardens, as well as one outhouse. A number of fukugi trees, similarly dating to the 18th century, also surround the house. They serve not only to help protect the house from strong winds (including during typhoons), but also provide yellow dye used for making traditional bingata; the bark can also be used for producing thread to be woven into cloth.

As is typical of traditional Okinawan homes, the main entrance through the stone wall, oriented to face south, features a hinpun, a stone block that blocks passersby from peeking into the home, and is also said to block evil winds or spirits from entering the space. Shisa (lion dogs) atop the roofs, as well as on the ground in the courtyard, serve a similar purpose, in scaring off evil spirits. The roof of the house was originally thatched, but red terracotta roof tiles were put into place in the Meiji period.

Entering past the hinpun, one comes into the main courtyard, with the storehouse (takakura) to the left (west), and the main house straight ahead (north), with an annex, directly attached to the main house, extending to the right (east). The main house, or omoya, contains eight rooms. Near the front are the ichibanza, nibanza, and sanbanza (lit. first, second, and thirdThe rooms), where guests would be entertained, and where other more public activities might take place. As in Japanese homes, one removes one's shoes and steps up onto a wooden veranda which separates the interior rooms from the outdoors. Sliding doors that separate the rooms could be opened, closed, or even fully removed to create larger or smaller spaces as necessary. The nibanza also contains the family altar (butsudan), where offerings were made both to the family ancestors and to various deities or spirits. A small room in front of the sanbanza, known as the nakame, was used for sorting produce or other goods and products, either for the family's own use, or for sale at market. To the left of the sanbanza is a large wooden-floored room (without tatami), which was used as a dining room, and gathering space otherwise. To the rear of the home are four tatami-matted uraza (lit. "rear rooms") which served as bedrooms, and were also used otherwise for more personal or private activities. Two additional rooms are located in the east wing ("annex," or asagi) of the house. These rooms were used by the second and third sons of the household until they married and formed their own branch households; the rooms were also used to receive elite guests, including government officials.

The kitchen is located to the far west end of the house; as in traditional Japanese homes, the kitchen is not elevated, and does not have a wooden or tatami-lined floor, but rather is a style of room known as a doma (lit. "earth space"), with an earthen floor. Having an earthen rather than wooden floor contributed significantly to reducing the danger of fires. This space contains a hearth and several spaces for cooking fires (kamado), and for placing pots and the like over the fires. A small set of shrines or altars, to the home's hearth deity (fii nu kan), among others, is also located in the kitchen, alongside numerous jugs and baskets for storing foodstuffs. The roof over the kitchen is quite high, and as in traditional Japanese homes, allows considerable space for heat and smoke to rise up away from the ground-level kitchen; soot that accumulated in the thatch helped make the roof slightly more fire-resistant.

The storehouse (takakura) just west of the main courtyard consists primary of an elevated portion, within which agricultural products would be stored. Elevating the storage helped to keep vermin out (at least to some extent), and to keep the interior somewhat cooler and drier, as breezes could blow underneath and help to remove some of the humidity that might otherwise accumulate. The takakura at the Nakamura House is somewhat unusual in that the lower portion, normally simply empty open space, has been enclosed with four walls, producing a second storage space on the ground level.

Beyond the storehouse, at the western edge of the compound, is the barn, or kachiku. A series of small narrow stalls would have housed horses, cows, and goats. Firewood was stored in an area above the stalls. A stone pigpen, or furuu, sits low in the ground in the northwest (rear) corner of the compound.

The Nakamura family who once owned the home trace their family history back to the early 15th century, when Gosamaru, lord of Zakimi gusuku, was instructed by the royal court to relocate to Nakagusuku castle. A notable ancestor of the Nakamura family, known by the name Gashi, served as an instructor or mentor to Gosamaru, and so relocated from Zakimi to Nakagusuku as well, taking up residence in the village below the castle.

Gosamaru's fall in 1458 had a severe impact on the family's social status and economic well-being, but some three hundred years later, around 1720, the head of the family was appointed jitô (district administrator), and the family grew wealthy and prominent enough to establish the expansive home which survives today as the Nakamura House.