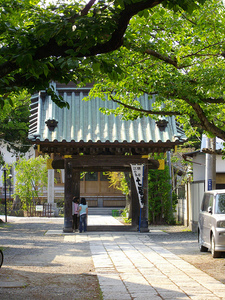 Myôryû-ji is a Nichiren Buddhist temple in Kamakura. The temple holds a statue of Jurôjin which is regarded as one of the Seven Lucky Gods of Kamakura.

The region around Myôryû-ji is said to have remains of the homes of the Chiba clan, who were strong supporters of the Kamakura shogunate. The temple, a full seven-hall garan, was built by Chiba Tanesada in 1385 to serve as a site for memorial services for his ancestors. Nichiren-shōnin himself was invited to preside over the temple.

The second priest of the temple was Nisshin-shōnin. He wrote a book called "Risshō Chikokuron" under the influence of sect leader Nichiren-shōnin. With this book, he tried to warn Ashikaga Yoshinori, the sixth shogun of the Muromachi shogunate, against misgovernment of the country, but was captured and submitted to many forms of torture. Finally, a searing hot pot was placed over his head, and he has since been known as "Pot Head Nisshin" (Nabe kamuri Nisshin).

The pond on the right hand side of the main temple building is said to show traces of where Nisshin-shōnin undertook 100 days of training in the pond in the middle of winter.