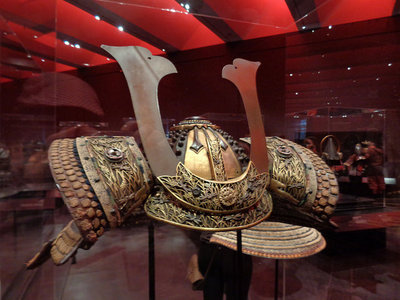 The Myôchin school, or family, was a lineage of renowned armorers stretching back to the 12th century. The successive heads of the Myôchin line remained prominent and famed through the Edo period, and retain a succession and a sizable collection of notable items of arms & armor today.

The lineage traces its origins to an armorer named Munesuke (宗介) who lived on Kujô-dôri in 12th century Kyoto. Attracting the attention and favor of Emperor Konoe (r. 1141-1155, Munesuke was granted the honorific art-name (gô) "Myôchin," which he then passed on to his descendants.

The 54th family head Myôchin Munesuke (1688-1735) is particularly renowned. He is buried at Kôgen-ji in the Komagome neighborhood of Tokyo along with a number of his successors.

Selected Members of the Myôchin lineage