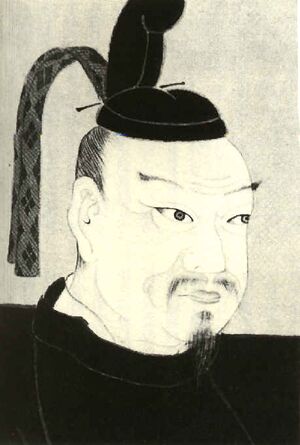 Môri Terumoto was born Môri Kotsumaru, the son of Môri Takamoto - heir to the great Môri Motonari. Takamoto died in 1563, however, and Motonari, though over 60, was forced to rule in his stead until Kotsumaru could come of age. At what appears to have been an early manhood ceremony, Kotsumaru took the name Terumoto (Teru coming from the shogun, Ashikaga Yoshiteru) and assumed command. When Motonari died in 1571, Terumoto inherited an enormous kingdom that stretched from Buzen on Kyushu to the borders of Harima and Bizen, a powerful navy (at the time Japan's finest), and the support of two gifted uncles – Kobayakawa Takakage and Kikkawa Motoharu. The Môri's traditional rival, the Amako clan, had been destroyed in 1566, and Motonari had left instructions that the clan be content with what it had and forego expansionist adventure. To a greater or lesser extent, Terumoto followed his late grandfather's instructions. Aside from skirmishes on Kyushu and gradual penetration further east, the first years of Terumoto's rule passed quietly. In 1575 the Môri and the Ukita of Bizen had allied and Takakage and Ukita Naoie brought down the Mimura family of Bingo, extending Môri influence there; similar advances were made on the northen Chugoku coast even as Motoharu clashed with Amako adherents under Yamanaka Shikanosuke. By this point, however, great changes had occurred in Kyoto that would have a significant impact on the Môri's future. In 1568 Oda Nobunaga had placed Ashikaga Yoshiaki in the position of shôgun, and now the latter began to resent his patron's heavy-handedness. Yoshiaki, so the story goes, had secretly sought the assistance of powerful clans outside Nobunaga's borders, and this included the Môri. Before his death, Motonari had declared himself no friend to Nobunaga, and the young Terumoto openly challenged Nobunaga. It happened that the Môri were to be drawn into war over the Ishiyama-Honganji, a religious stronghold in Settsu Nobunaga had been besieging since 1570. Not actually bordered with Nobunaga (yet), Terumoto turned to the vaunted Môri navy. Nobunaga's 'admiral', Kûki Yoshitaka, had cut the Honganji's sea-lanes and sat in blockade off the coast. Terumoto ordered his fleet, commanded by Murakami Takayoshi, to make for the waters off Settsu and, once there, the navy inflicted an embarrassing defeat on Kuki and opened the Honganji's supply lines. Stung by this loss, Nobunaga responded in a typical fashion-he improvised. He ordered the construction of six enormous warships (supposedly fitted with at least some form of metal plating on the sides) and once these were completed in 1578, had the six leviathans sent to the Inland Sea. Armed with cannon, the warships encountered the Môri navy near the site of the earlier battle. In this Second Battle of Kizugawaguchi Kûki Yoshitaka avenged himself, and drove the Môri away. A further attempt by the Môri to break the blockade the following year was turned back, and in 1580 the Honganji surrendered.

By then Terumoto had a larger problem. The defeat of Takeda Katsuyori at Nagashino in 1575 and the death of Uesugi Kenshin in 1578 allowed Nobunaga to concentrate on the Môri and he sent two sizable contingents westward into the Chugoku region. Hashiba (Toyotomi) Hideyoshi was to march along the southern portion of the arm (the Sanyodo) while Akechi Mitsuhide moved into the upper provinces (the Sanindo). The progress was slow. While the Ukita family of Bizen switched sides, a number of Môri strongholds resisted heroically. Bessho Nagaharu of Harima would hold out in Miki Castle until 1580 and Kikkawa Tsuneie resisted in Tottori Castle (Inaba province) for 200 days. Both castles gave in only went literally on the verge of starvation.

In 1578 Hideyoshi captured Kozuki Castle in Harima and gave it to Amako Katsuhisa, who, supported by the famed Yamanaka Shikanosuke, hoped to restore the defunct Amako Clan to power in Izumo. Perhaps goaded by the mere name of the new defender of Kozuki as much as anything else, Terumoto sent his uncles to retake the castle. This they did, and both Amako and Yamanaka were killed. This was to be a rare case of Môri initiative in the war. Terumoto was not the leader his grandfather had been, nor did he possess the charisma his father Takamoto was said to have had. He did possess something of Motonari's manipulative gift, but not the cleverness to use it wisely.

By 1582 a Môri defeat seemed inevitable. Hideyoshi had forced his way into Bitchû province and laid siege to Takamatsu Castle. Shimizu Muneharu (a former Mimura retainer) defended Takamatsu stoutly, but its loss would all but open the way into Bingo and, after that, Aki, the Môri homeland. Not once in nearly six years of war had Terumoto led an army into the field to openly challenge the invaders, and displayed little sign of doing so now.

Hideyoshi knew that Takamatsu would be a tough nut to crack and that heavy losses would only benefit the Môri, so he resorted to a stratagem. Diverting the waters of a nearby river, he flooded the castle grounds, making Takamatsu a soggy island. By now Terumoto had brought up a relief force, but hesitated to attack Hideyoshi directly. Shimizu, for his part, responded to an offer by Hideyoshi that would spare the lives of his men, and committed suicide after ordering his men to surrender. At this critical point, fate intervened on, it could be said, the behalf of the Môri. Hideyoshi intercepted a message from Akechi Mitsuhide intended for Terumoto containing the news that Nobunaga was dead at the Akechi's hand. With this valuable knowledge under wraps, Hideyoshi negotiated a peace treaty with the Môri, taking as spoils Hôki, Mimasaka, and Bitchu but leaving the Môri with the remainder of the Chugoku region (save Bizen, owned by Ukita). Probably most relieved at Hideyoshi's evident generosity, Terumoto agreed, allowing Hideyoshi to speed home and defeat Akechi Mitsuhide before anyone else was the wiser for it.

As frustrated as the Môri may have been by their discovery of the truth, they did not break the truce, and in time became Hideyoshi's closest supporters. Terumoto sent the 'Two Rivers' (Kobayakawa and Kikkawa) to lead troops for Hideyoshi in his invasions of Shikoku (1585) and Kyushu (1587). In 1590 he sent ships to assist Hideyoshi in his reduction of the Hojo. When Hideyoshi invaded Korea in 1592, Terumoto himself led a 'division' of troops there, although much of his time seems to have been taken up fighting Korean partisans.

Before Toyotomi Hideyoshi died in 1598, Terumoto was named one of the five regents tasked with acting as administrators until the young Toyotomi Hideyori could come of age. Of the five (which also included Tokugawa Ieyasu, Ukita Hideie, Maeda Toshiie, and Uesugi Kagekatsu) Terumoto ranked second in strength behind Tokugawa with an annual income of nearly 1.2 million koku.

Perhaps inevitably, Hideyoshi's posthumous government began to splinter, with discord fueled by mutual distrust and the intrigues of Tokugawa and Ishida Mitsunari, one of the 5 Bugyo (commissioners) named at the same time as the regents. By 1599 sides had begun to form between these two wildly different men, and at first Terumoto thought of siding with Tokugawa. Unfortunately for Terumoto and the Môri, he listened to his old advisor, Ankokuji Ekei (?-1600). A long-time manipulator in a monkish habit, Ekei convinced Terumoto (probably accurately) that Ieyasu was out to disinherit young Hideyori. When Terumoto declared for Ishida Mitsunari, the latter, for political reasons, named Môri the 'commander-in-chief' of the gathering Western Forces. Terumoto displayed little enthusiasm for his new role and failed to grasp the reins of command, vacillating even as his chief commanders argued and Tokugawa called the 'eastern forces' to arms. Mitsunari finally told Terumoto to take up residence in Osaka Castle and stay there, making Terumoto's command of the army quite nominal. The error of this decision would become evident on 21 October, when the massed forces of East and west met at Sekigahara.

The combined Môri faction (to include Môri Terumoto, Môri Hidemoto, and Kikkawa Hiroie) was the largest contingent in Ishida's army, but in the actual battle, it barely moved an inch. Sulking in Osaka Castle, Terumoto had been convinced by Kikkawa Hiroie that the best course of action now was to do nothing, indicating that both considered Ishida a lost cause - or at least one not worth fighting for. Kikkawa let this reach Ieyasu, who suggested that inaction would bring rewards if the Eastern Forces won. In the event, things worked out differently. Although Tokugawa had initially indicated that he would honor his unofficial understanding with Kikkawa, this seems to have been solely to coax Terumoto into surrendering the powerful Osaka Castle. Once the campaign had been wrapped up and Osaka Castle safely in Tokugawa hands, Ieyasu declared that it was the duty of a warrior to fight, especially the so-called 'commander-in-chief' of an army. Terumoto's lands were sorely reduced and in a move that might as well have been out of cruel humor, some were transferred to Kikkawa. In the end, Terumoto was left with estates worth 360,000 koku and his head. In what must have been a particularly bitter pill, he was forced to give up Aki - the Môri home for centuries. As for keeping one's head, the same could not be said of Ankokuji Ekei, who was executed in Kyoto along with Ishida Mitsunari and Konishi Yukinaga. Terumoto, who had lost either control or influence of five provinces, went on to shave his head and became a monk, his career, it could be argued, shaken by a number of key errors in his judgment. His wisest decision as daimyô - to make peace with Hideyoshi - only delayed the inevitable for another 18 years.