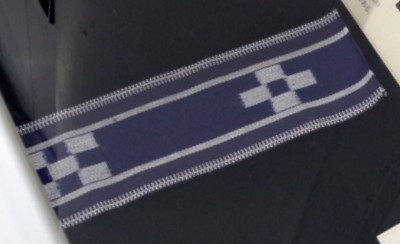 A minsaa sash on display at the Fujukan, University of the Ryukyus Museum

Minsaa is a style of decorative weave known today as representative of the Yaeyama and Miyako Islands. It is typified by a five-and-four pattern of alternating squares, which are today seen in myriad contexts throughout the Yaeyama and Miyako Islands. Though minsaa has long been a key symbolic element of Yaeyama/Miyako efforts to distinguish themselves from "Okinawa" and to resist incorporation into a single, homogeneous, "Okinawan" identity, minsaa is today, ironically perhaps, coming to be used (and seen) as symbolic or representative of Okinawan culture as a whole; even as Okinawan culture is spread into the outer islands and ideas of Okinawanness are mistakenly applied to the entire island chain, at the same time, cultural elements such as minsaa are appropriated into Okinawan culture as if they had belonged to Okinawa all along.

As late as the 1950s, minsaa was frequently used as but one of many elements of typical folk dance costumes. But it was after Tonomura Kichinosuke, head of the Kurashiki Mingeikan, began promoting minsaa as an emblematic Yaeyama/Miyako folk art item and souvenir that it rapidly began to become commercialized and highlighted by the tourism industry. Tourism promotional materials today often cite false, invented, stories about the folk meaning of the motifs.