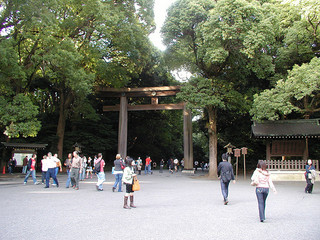 One of the main torii at the entrance to Meiji Shrine, near Harajuku Station

Meiji Shrine is a large Shinto shrine located in Shibuya-ku, Tokyo. It was established in 1920, in memory of Emperor Meiji, who died eight years prior.

Discussions about building a shrine in honor of Emperor Meiji and Empress Shôken, on the site of the Emperor's funeral ceremonies, began in 1912, almost as soon as it became publicly known that the Imperial Household Ministry planned to have the emperor buried in Kyoto, and not in Tokyo. The House of Peers passed a resolution allowing the construction of such a monument in 1913, and construction was mostly complete by 1920. A Treasure Museum still open to the public on the site houses a number of treasures of the Meiji reign, including clothing and carriages used by the emperor on his Six Great Imperial Tours.[1] In 1926 the Meiji Memorial Picture Gallery (Seitoku Kinen Kaiga-kan) was constructed in the shrine's outer gardens (Meiji jingû gaien). It is located at the end of a long path lined with gingko trees, and contains eighty or so large mural paintings of events in the lives of the Meiji Emperor and his Empress. A kusunoki (camphor) tree stands behind the gallery, on the spot where the Meiji Emperor's funeral carriage had been placed for public viewing immediately following the formal funeral ceremonies. The choice of tree is, perhaps, a reference to 14th century imperial loyalist Kusunoki Masashige, who was particularly celebrated in the Meiji period and pre-war era.[2]

The shrine grounds cover roughly 700,000 square meters. Most of the shrine buildings were destroyed in the 1945 air raids, and rebuilt in 1958.