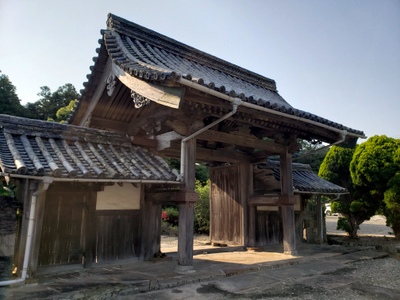 The sanmon gate of Kokubun-ji on Tsushima, dating to 1807.

Kokubun-ji is a Buddhist temple in Izuhara-chô (formerly, the castle-town of Tsushima Fuchû) on the island of Tsushima. It is known as the site of the island's greatest or most famous four-legged sanmon temple gate, and as the former site of guesthouses constructed to house the 1811 Korean embassy to Edo.

The 1811 Korean embassy was the final in a series of embassies from the Joseon Kingdom to the Tokugawa shogunate; unlike previous embassies, this one did not travel to Edo, or to mainland Japan at all, but rather was received by shogunate officials on Tsushima. Lodgings were constructed or otherwise provided for shogunate officials in various locations in the castle-town; meanwhile, large guesthouses were constructed at Kokubunji. The shogunate provided funds for much of this.

A large new sanmon gate was constructed for the temple at the same time (in 1807, in preparation for the 1811 embassy). The temple was then dis-established following the Meiji Restoration, and later burned down in a fire, leaving only the sanmon gate surviving. The temple has since been re-established, but the sanmon gate in particular remains as the only structure of the historical complex.