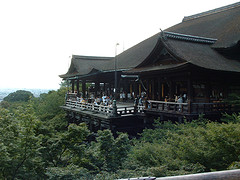 The main hall at Kiyomizu-dera.

Kiyomizu-dera is a Buddhist temple of the Hossô sect in the Higashiyama area of Kyoto. It takes its name, "pure water temple," from the sacred waterfall around which the temple has been built. The temple has been designated part of the "Historic Monuments of Ancient Kyoto (Kyoto, Uji and Otsu Cities)" World Heritage Site.

Kiyomizu is the 16th temple on the Western Provinces 33-temples circuit. The main object of worship is an 11-headed Kannon.

Kiyomizu is a rather expansive complex, consisting of many buildings organized around a series of plazas, sprawling up and down across a section of the Higashiyama mountains/hills. The Main Hall (hondô) has been designated a National Treasure. It was rebuilt in 1633 along with the sutra hall (kyôdô) and a number of other structures on the grounds. The latter has been designated an Important Cultural Property, and contains, in addition to a store of sutra scrolls, a Shaka Triad sculpture group, and a ceiling painting of a dragon by Okamura Nobutomo.

There is a saying in Japanese, Kiyomizu no butai kara tobi oriru tsumori de[1], "to leap from the stage at Kiyomizu", meaning something akin to the English "to take the plunge."